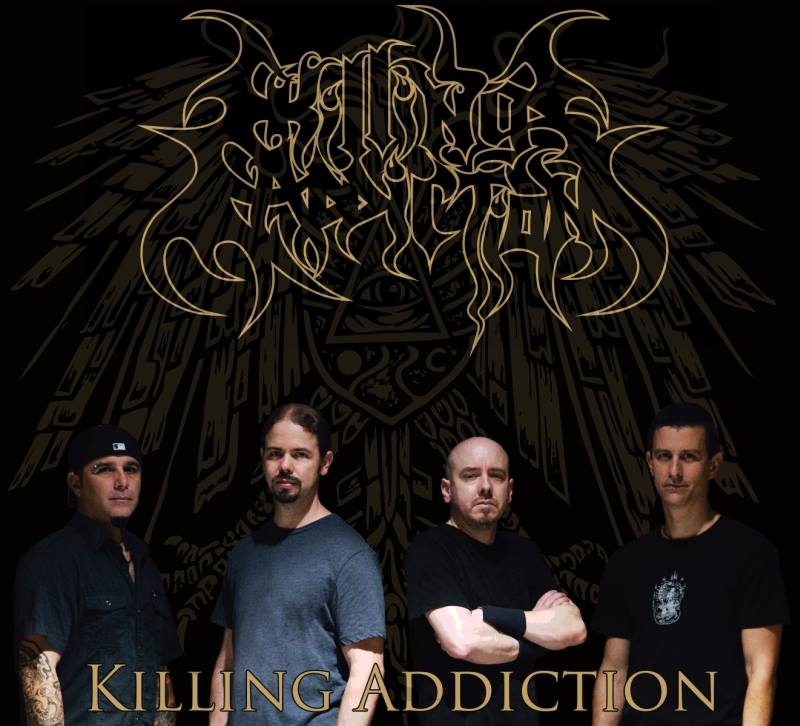 KILLING ADDICTION is a veteran Death Metal band from Ocala, Florida that was formed in 1989 by Chris Wicklein and brothers Chad and Pat Bailey, which pioneered the Death Metal scene in their area of central Florida. In their first few years, KILLING ADDICTION released their “Legacies of Terror” demo (1990) and the “Necrosphere” 7”EP (1991, Seraphic Decay Records), both of which were very well received in the death metal underground.

The band’s debut full-length album “Omega Factor” was released on the short-lived American label JL America (1993), which has since become considered an old school Death Metal classic recording and was reissued by Spain’s Xtreem Music record label (2018). Another achievement of 1993 was KILLING ADDICTION’s recognition by the Annual Tampa Bay Metal Awards which voted them the Best North Florida Band of 1993. Once JL America was no more, KILLING ADDICTION released an independent EP, titled “Dark Tomorrow” (1994) which was the last recording during their formative years. Chris York parted ways with the band soon after the release of “Dark Tomorrow”. His departure, for personal reasons, coupled with an underground music scene that was then suffering from fatigue, led to the decision to fully disband.

After more than a decade apart, KILLING ADDICTION reformed in 2006, but only with Chris Wicklein and the Bailey brothers. New music was written and eventually the decision was made to welcome Gabriel Lewendowski as the band’s drummer. Their first studio recording was the 6-song EP (+ bonus) “Fall of the Archetypes” (2010), released by Xtreem Music and an independent, limited-edition, six-song EP version. This recording was much more aggressive than their earlier work and it established KILLING ADDICTION as a more modernized Death Metal band still retaining their old school roots.

In 2013, Chris York finally returned to complete the band’s classic lineup. It wasn’t until York’s return that live performances were again underway. Eager to release new music with the classic lineup, KILLING ADDICTION recorded a 2-song EP entitled “When Death Becomes an Art”, independently released in 2014 and as a 7″EP by Inverse Dogma Records (Italy) in 2015. The band continued live performances throughout 2015 and wrote enough music to begin a new recording in early 2016. However, 2016 also saw the band suffer their greatest loss when Chad unexpectedly died late that year. “Shores of Oblivion” (Xtreem Music, 2016) was the EP that followed soon after his passing. This recording was very well received and ranked at a perfect score or as the best EP release of the 2016 by prominent sources such as MetalArchives and Metal-Rules.

Long-time friend Mike Serden (ex-Brutal Enemy) stepped in as the new guitarist to help the band continue after losing Chad. Mike was fundamental to KILLING ADDICTION’s performances in support of “Shores of Oblivion” over the following several years until his departure at the end of 2018. In early 2019, the band ceased live performances to focus on writing material for the next full-length album which began production in 2020. Devon McDonough (Ebullition) was also announced as the new guitarist in 2020. In 2021, “Mind of a New God” was announced as the title of the new full-length album to be released once again by Xtreem Music, this time on CD, 12″LP & Cassette formats, in the early summer and followed by live support.