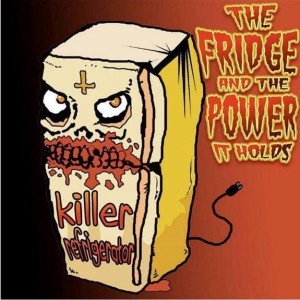 Millennia ago, an omniscient refrigerator named Lord Freezus Christ appeared from the primordial void and vowed to destroy humanity. He almost succeeded, but two humans were able to survive and repopulate the earth.

Fast forward to present day. Appliances rule and control our lives. We are slaves to our iPhones, our toasters, our blenders; Easy-Bake Ovens are employed from an early age to enslave us into appliance dependency. We have become a helpless species.

In 2014, Cody Coon and Luke Java Sackenheim decided to rebel against the appliances. They started the band Killer Refrigerator. Since their formation, they ve released an LP (When Fridges Rule This World) containing songs as, Bed, Bath & Beheaded , Appliance Vio-lence , and Microwave Massacre . Killer Fridge not only draws from their founder Cody s belief that appliances want to destroy the world, but also from cheesy horror films such as Microwave Massacre, Terrorvision, and Basket Case. They are about to release an EP (The Fridge and the Power It Holds) and their 2nd LP (Refrigeration Plague).

KILLER REFRIGERATOR are the first group to speak out against this appliance-stricken world. No one before has had neither the power nor the capability to stop the Fridgepocalypse from happening. Killer Fridge provides an invaluable service to its listeners by providing them with necessary information regarding appliance defense. They are the only weapon that can stand against Lord Freezus. This is not a joke. Killer Fridge is 100% serious, seriously. “If you don t listen to Killer Fridge and you wake up to a toaster setting your family on fire, don t come crying to us. It s your own damn fault.”