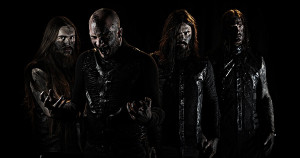 Continuing the new chapter started with “Apex Terror” (2013’s fifth full-length) that saw the band evolve from their original Black Metal roots towards a colder and darker mix of Industrial coldness and Blackened Death Metal brutality, the new album, that’ll mark the band’s 15th anniversary, the new and sixth full-length will be released this fall through Kaotoxin.

OTARGOS is a well-known road machine having toured Europe and South America with the likes of Watain, Dark Funeral, Anaal Nathrakh, Deströyer 666 and many more and, as such, already have quite a few gigs and festival appearances confirmed, among which UK’s Incineration Fest with label-mates SIDIOUS and France’s Chaulnes Metal Fest with label-mates AD PATRES: