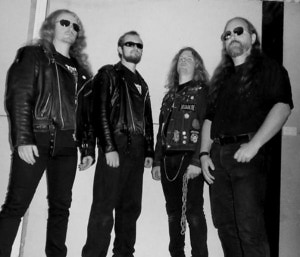 With its highly-anticipated worldwide release of Inner City Wolves coming in just over a week, Australian trad metal maniacs JOHNNY TOUCH have hooked up with Grande-Rock.com for the exclusive premiere of album track “Dishonourable Discharge.”

JOHNNY TOUCH previously released a demo tape and two split 7-inch records and are barely known outside of their homeland. Inner City Wolves is an amazing debut and serves as an example of a band creating an original work that will leave a lasting impression on the heavy metal world. Led by a first rate vocalist and taking the best parts of JUDAS PRIEST, IRON MAIDEN, and METALLICA, with YNGWIE MALMSTEEN style ripping leads that shred the soul, Inner City Wolves gets it right across the board! The songwriting is extremely complex, yet catchy as hell. Get ready for what is sure to be considered one of the best heavy metal albums of 2014 and a stone cold classic for years to come.Inner City Wolves will be out on August 19 on Shadow Kingdom Records.