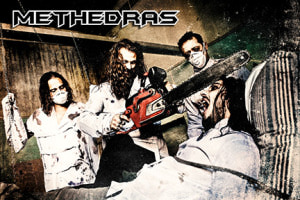 Italian veterans METHEDRAS have released the video for “Subversion,” the first single off the band’s upcoming album System Subversion. The video, directed by Salvatore Perrone (THE MODERN AGE SLAVERY, DILLINGER ESCAPE PLAN) is now playing at this location.

Moreover, the band has been announced as direct support for Floridian death/thrash legends Solstice on their first-ever European tour. The tour is set to kick off in November with a full list of dates coming soon.

Quintessence of the most direct-in-your-face thrash-death style, Methedras sets among the leading underground Italian bands, a real war-machine which has been able to release a demo and three full-length albums during its 18 years of activity, as well as have performed hundreds of concerts throughout Europe, many of them in support of big names of the international metal scene (TESTAMENT, DISMEMBER, DESTRUCTION, EXODUS, OVERKILL, SEPULTURA above the others), without ever losing an ounce of anger and energy.

Quartet formed by Andrea (bass), Claudio (vocals), Eros (guitars) and Daniele (drums), originally near Milan in 1996 with a two-guitar line-up, the band has changed over the years various members preferring a solid line-up with only one guitar, arriving to a proper own style with no compromise: a sort of derived thrash metal (Low/ The Gathering era TESTAMENT) spiced with more typical death metal influences (DEATH, ENTOMBED) and a groove-hardcore approach concerning the vocals (early MACHINE HEAD / PANTERA).

Previously under the flag of Punishment 18 Records, with the well-reviewed album Katarsis released worldwide in 2009, the Italian thrashers just finished completing the creation of their last effort, System Subversion, recorded in the beginning of 2014 at the superb Domination Studio, under the guide of the mastermind Simone Mularoni (DGM, NECRODEATH, BULLDOZER, VISION DIVINE, THE MODERN AGE SLAVERY), and to be released at the end of the year.

“…a spectacular effort by a veteran metal band.” – Glacially Musical

“A state-of-the-art heavy and crisp sound blares out of the speakers accompanied by a maniacal laugh and enough modern Thrash sensibilities to crush an elephant, (poor elephant). Methedras waste no time in preparing their mission statement and declaring it boldly.” – Wonderbox Metal