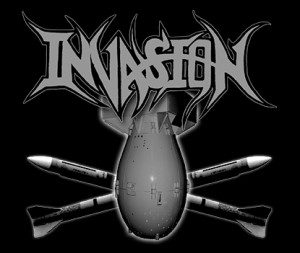 U.S. warmongers & death merchants INVASION are back and are gearing up to hit the studio to record their fourth CD titled Destroyer of Mankind.

“We started rehearsing material at the beginning of the year & unfortunately original drummer Crusader became ill so we ceased writing while we discussed our options. Hence, with his consent we found a new drummer named Diabolicon from the area who agreed to step in and fill his shoes while Crusader recovers from his ailment. In the meantime, we have 10 songs filled with utter hate & waritude ready to record. Two more songs are in the works but we may seek to release those on future CD compilations or possible split vinyl collaboration.”

When asked about the Swedeath sounding guitars from the band’s third release, Orchestrated Kill Maneuver, Phlegm stated, “The sounds for the third release were something we wanted since our debut, Conquered appeared on The Plague label back in 1999. I don’t think we’ll be varying the guitar sound much as that is something that lends itself to the overall INVASION aesthetic. It is too immense to ignore.”

Artwork for the future release will be done by Cursed Productions main man Ray Miller. In addition, the recording session will feature the guitar work of Thomas Brander from the legendary thrash GODS NUM SKULL. To date, the band has released three albums of Earth-shattered & war-driven death/thrash material: