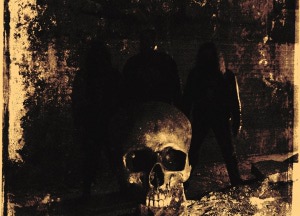 The nihilistic and obscure German Death Metal band INEXORABLE has signed a deal with UNHOLY PROPHECIES for the release of a new EP called “Nigrum Cuniculum“. This EP will include three completely new tracks of the band and three cover versions (MAYHEM’s “De Mysteriis Dom Sathanas“, IMMOLATION’s “I Feel Nothing” and MYSTICUM’s “Black Magic Mushrooms“). One of the new tracks is called “Portals“. The other two titles will be soon revealed. The pressing will consist of 200 handnumbered copies in pro-tape and pro-cover.

Once again the band writes about Death, perishabillity, darkness and the emptiness from most existences. Recording sessions will be held at the Time And Dust Studios of Jan Weidauer (http://www.tad-studio.de) in Chemnitz, Germany. Jonty Lava (HERETIC) will be also implicated. They will start in September; the expected release date was set to the end of October 2014.

The rest of the details as well as the cover art will be revealed soon. Stay tuned for more. INEXORABLE stands for crossing borders and breaking down walls. A dark and morbid soundscape is waiting to visualize your transitoriness just before your inner eyes. Nihilism, obscurity and the inevitable death are inspiration and principle of INEXORABLE’s music.

With their last EP, “Morte Sola“, INEXORABLE produced yet another document telling you about the madness of all worldly striving. Now it’s the turn to reveal the next manifest: “Nigrum Cuniculum“. Be aware that there is no hope! Because death is great and we are his! Listen to the full “Morte Sola” EP the band released independently on their Bandcamp page. This EP is limited to 1.000 units and was released as digipack. There are still copies available either from us in our shop or directly from the band. Support them!