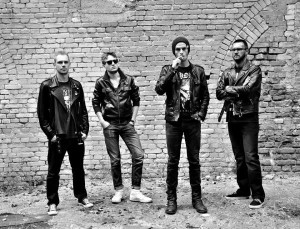 IN HELL’S DUTY has existed in current shape since December 2013. In its work, the band is trying to find the right balance between inspirations taken from the modern metal scene on one hand, and the more classic for the genre on the other. IN HELL’S DUTY treats of man, his rises and falls in hell he creates around himself, on and on anew. In July 2015 the band recorded its debut EP entitled “Heaven’s Eyes Blind” in collaboration with Jędrzej “Stiffler” Wencka who was responsible for recording and production of the material. Artwork by Anna Borowa. The four-track EP was released on the 9th of November 2015 on the Internet (YouTube, Soundcloud, Bandcamp), then on a compact disc on the 19th of November 2015.

To date, In Hell’s Duty has shared the stage with such bands as INCITE (USA), ABSOLVA (UK), TURBO (PL), The Sixpounder (PL) and Hope (PL) as well. Either the title of the EP and the lyrics are some kind of antagonism toward human’s attitude to life. We tend to vacantly give our divinity away to others who do not hesitate to use it and deceive us. Thus, we go astray and lose our way. In other words, “Heaven’s Eyes Blind” is a musical manifest which favours life and death over vague existence, and love and hate over inhuman apathy.