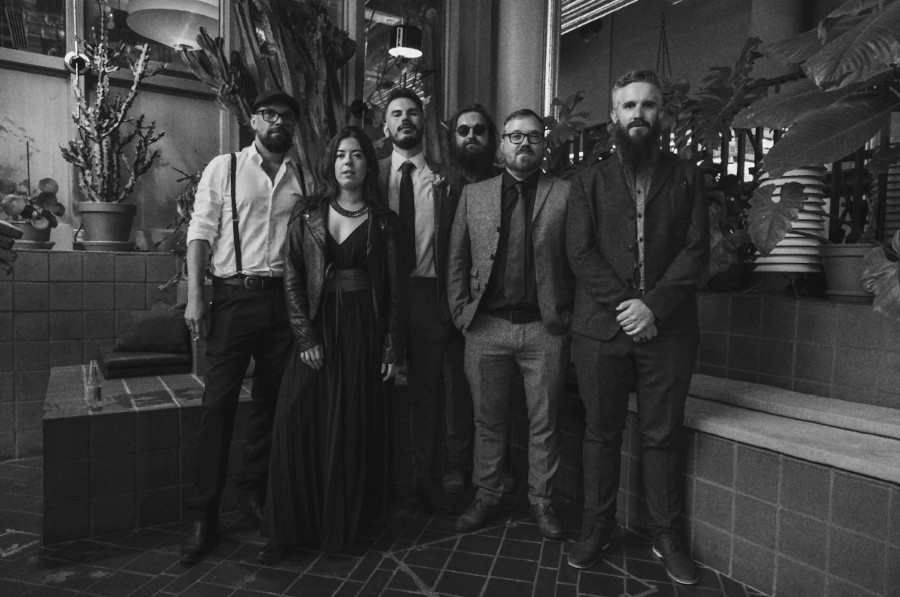 HUNDRED YEAR OLD MAN are a post-metal six piece band based in Leeds, UK. HYOM combine hard hitting sludge riffs with a post-hardcore intensity and beautifully textured atmospheric qualities. The band’s lengthy songs ebb and flow, combining multiple screaming vocals, crushing riffs and ambient and electronic elements including synths and samples, weaving a narrative through their songs. HYOM are known for their energetic, intense and visceral live performances, using dynamic lighting, smoke and often playing in near pitch black to immerse themselves and audience alike.

In 2017, Hundred Year Old Man signed with experimental music label GIZEH RECORDS who released their critically acclaimed debut album ‘Breaching’ in April of the following year on CD/LP/DD. This followed the limited vinyl release of the ‘ReI’ EP in the February, which was listed in the Metal Hammer top 5 EPs of 2018. HYOM have been featured in Kerrang! articles the ‘Brit Pack’, published in May 19, and Daniel P Carters ‘New Noise’ column published July 2018. A review of their Gizeh Festival performance was published in Wire magazine and they have been featured in the Bandcamp ‘UK Post Metal Guide’ published in May 19. HYOM have had radio airplay on Daniel P Carters Radio One Rock Show as well as French, German and Belgium based genre radio, Spotify playlists and have had a track featured in the Amazon MiniSeries ‘Devils Gold’.

HUNDRED YEAR OLD MAN have played well received shows with acts such as DEAFHEAVEN, NADJA, WIEGEDOOD, EMPLOYED TO SERVE, BIRDS IN ROW, CULT LEADERCand CONJURER, as well as being one of few bands to be invited to play Bloodstock Open Air Festival two years in a row, returning to open the whole festival in 2018. Other festival appearances include Damnation Festival in November 2018 and Siege Of Limerick in Ireland which was followed up with an appearance at Monolith Festival in 2019.

In February 2019, HYOM embarked on their second headlining tour of Europe covering 9 countries in 16 days thus completing the touring cycle for Breaching. The band then returned to the studio to commence work on the follow up, “Sleep In Light”, which will be released on 17th June 2022 by Consouling Sounds. After the tragic loss of Owen Pegg, the band decided the best way to honour him was to regroup and continue his legacy, drafting in Tom Arnold (Ghostmoons/ ex-Ba’al) to complete the line up. Shows at the beginning of 2022 mark the first time HYOM have played since 2020 and will be the debut shows of both Tom and Helen Tytherleigh with the band.