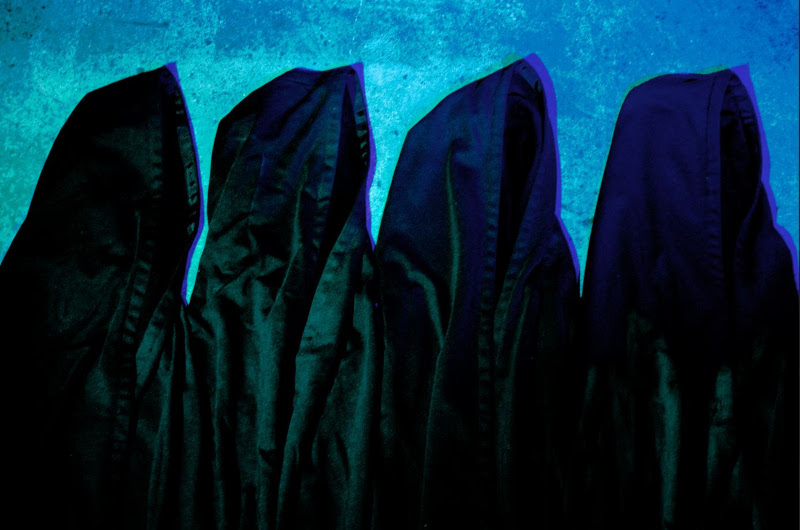 HUNDRED HEADLESS HORSEMEN is a psychedelic death metal band hailing from Helsinki, Finland. To commemorate the release of their first full length album 15 moons ago, and to provide supplementary insight into the microcosm presented by the work, the band is releasing an audiobook entitled “Apokalepsia / Journal”. The audiobook acts as a prequel to the events presented on the concept album Apokalepsia that was released by Inverse Records in 2021.

The band states: “The journal fragments presented in the audiobook were released in textual format in conjunction with the release of the album already in 2021, but we felt that the events that have unfolded since have given particular resonance to these writings. We watch in awe, our hands bound by the chains of extractive capitalism, as our lust for the black blood of the Earth is quite literally fuelling the most unthinkable atrocities to be perpetrated in front of our very eyes. We felt that we now needed to revisit these texts once more and listen to the voices behind the letters. Hence, we set out to reconstruct these voices to an audible form to better highlight their importance in the world of “Apokalepsia” and also beyond. The soundscape of the audiobook acts as an introduction to the album but also as its own independent sonic work to introduce the listener to new aspects of this formerly unknown universe.”

“Apokalepsia” is a group of symptoms characterized by recurrent seizures. These episodes can vary from brief and nearly undetectable interludes to long periods of vigorous shaking, hyperventilation, suffocating despair and a failure to function in a world defined by its imminent devastation. Apokaleptic seizures have a tendency to recur. Many victims also describe vivid visual and auditory hallucinations during apokaleptic seizures. The journal entries of these formerly unknown cases tell much about the inner struggles of the victims.

One of these cases had written: “The momentum that upholds life comes from death, darkness and decay. No matter how delusional we become, our efforts will never be grand enough to transcend this circular motion. In a stark contrast to nature, the economy was always a fiction. A fiction that nevertheless had very real consequences to our lives, which have led us to the profound misinterpretation of its true form. The system we had built long ago is now eating us alive.”

The Apokalepsia / Journal audiobook was recorded and mixed by Antti Sundberg, voices reconstructed by HHH, and mastered by Valtteri Virolainen at Sir Näs Studios in Helsinki, Finland.

The cover photos for Apokalepsia / Journal were taken by Antti Sundberg. Karl Ketamo (https://www.karlketamo.com) worked with us to create a visual form for the Apokalepsia concept.