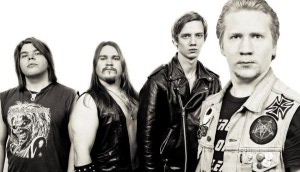 It all started back in 2005 in Sweden with the two brothers Lars and Björn Sköldmark and they started to write songs together. In 2007 the two brothers had recruited a guitarist, Anders Nilsson, and a drummer,Erik Forsgren (SLOWGATE, SKELETON BIRTH) and they had their first gig in at a local festival. The band went into studio to record their first demo “Lawgiver” in the beginning of 2008. During the next year the band lost both Anders and Erik, so they had to recruit some new members.Tommy Johansson (Reinxeed) joined the band as a guitarist but no drummer yet.

The band had some new material and went into studio to record their second Demo “Path to Victory” in 2009. Later into 2009 the band split up on the grounds on that Tommy Johansson and Björn had too many bands they were busy with. In about a half year after that Björn and Lars sat down and had a few beers and agreed that HEROES OF VALLENTOR would unite again!

Once again they needed new members so they started to search. They found Emil Ruthström-Sandin as a drummer and Stefan Norlin (Obliteration Imminent) as a lead guitarist. Now they were at full force once again.They decided to play and played a lot in Sweden for 1,5 years. During 2012 Stefan left the band, because of work, and they recruited Calle Sundberg (Charlie Shred, ex-Reinxeed) as a lead guitarist. The band wrote new songs and eventually they came in contact with Inverse Records to release their debut album “The Warriors Path Part I” and it will be out October 10th 2014. HEROES OF VALLENTOR longs for more raging battles and so the Quest begins!