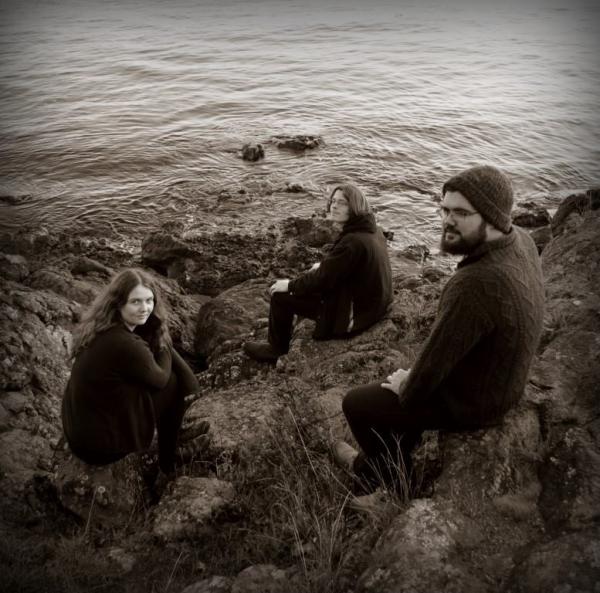 Hello and welcome! How are you at the moment? Could you say a few words about HARROW’s music to the reader who may not yet know you?
Hello! This is Ian of Harrow. I’m doing fairly well. We’re doing our best to suffer a brutal heat-wave that has currently settled over Cascadia.

Who named the band and where did he take the name? …and this logo is really great!
I named the band after our first bass player brought up the word „harrowed.“ HARROW seemed a little simpler and it has many meanings, all which fit with the concept of the band. The original logo was drawn by my highschool friend Yannick Vernice.

HARROW plays somewhat atypical black metal. Was this the obvious choice when HARROW was born?
I think so. I was always trying to blend all the genres I like together, even from the start. I think we’ve just reached the point now where we can do it in a way that really works and isn’t awkward.

What are the themes and concepts behind this actual album (‘Fallow Fields’)? Where do you find the majority of your inspiration is derived from?
It’s based around a journey of being solitary and alone to finding others of like mind. In this case the inspiration comes directly from my life experience. ‘Fallow Fields’ is a very inward looking album. 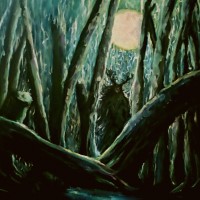 How does the new album differ from your previous work, if at all? Do you feel this is an evolution or even a fresh start?
It’s a bit of both. It’s a fresh start in the fact that it was recorded with a whole new lineup. In many ways Harrow is a different band compared to our early days. But, musically I think it is an evolution as well. We’re always getting better at actually creating what we hear in our heads.

Tell me a little bit about your new EP, ‘The River’. Is it a concept record?
Yes, it is based on the exploration of the river as a metaphor, first as a romantic and sublime place in the first track, and then from its place in Buddhist cosmology as a place of dissolution and rebirth in the cycle of samsara. The artwork is a dead salmon, which seemed the perfect local metaphor for this. Salmon are a staple in west coast diet, and a mythological creature in native lore, as well as being cyclical animals who come back to exactly where they are born to lay their eggs, die, and be reborn again through their spawn to continue the cycle. 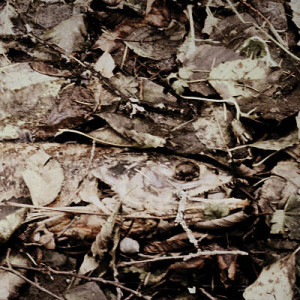 The one thing about HARROW ’s music which stands out is the mysterious, moody, and ambient atmosphere… You have elements of folk metal, occult rock, and doom metal in your music. What has inspired you to compose such beautiful mysterious music over the years?
We live in a very beautiful and wild place. It is full of forests, mountains, rivers, lakes, teeming with animals of all sorts, and surrounded by the great Pacific ocean. You can go many places and not see another human for as long as you want. At first the music simply attempted to express this grandeur. Over the years, as we’ve grown and life has become more complex, we recognized the importance of the struggle to protect this beauty from those spiritually dead entities who would exploit it for material gain. We’ve delved into spiritual tradition and heritage as well. Even the simple human experiences of love, loss, death, the question of God inform our music.

To put it simply: our music is just an expression of what it is to be us in this place, in this time.

Do you feel it was important for the band as artists to interject new elements into the music to keep it interesting?How much important is evolution for your music?
I guess it depends on the band. There are certain bands who have one thing they do very well and end up making a band work based on a model they are REALLY good at. I’d say those bands are pretty rare. The ones I personally enjoy the most are always pushing to see what sort of new elements they can add. It’s definitely hugely important for Harrow. I’m always trying to find new angles to look at an old formula from. Writing a 4-5 minute black metal song with no dynamics is of no interest to me. 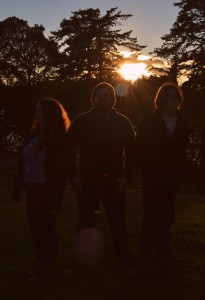 What do you think of the current state of black metal in Canada? So you consider Canada to have a good scene?Do you have any contact with bands from Quebec?
In Vancouver, close to us, there’s been a pretty big resurgence of the more brutal sort of black metal, a lot of it inspired by the original Ross Bay Cult bands. While we don’t play that kind of music I’ve really enjoyed getting to know some of those bands around here. We just played the first incarnation of The Covenant festival, a black/death metal fest in Vancouver, and the highlights for me were GAROTTING DEEP and RITES OF THY DEGRINGOLADE. I’d encourage anyone looking for good Canadian metal bands to check them both out.

It’s hard to talk about a Canadian scene as a whole. Canada is too gigantic to be aware of everything going on everywhere. From what I can see though, the west coast has it’s own thing going on, Calgary has quite a few good bands, and the Montreal area is always very active. As for the places in between, I don’t really have a clue. We don’t know any of the Quebecois bands personally, but I’m definitely a fan of a few of them (FORTRESSE, GRIS, SOMBRES FORÊTS).

In your opinion what makes a band successfull? Is it only hard work?
Hard work, attention to detail, and a whole lot of patience is pretty important. I guess for some bands luck is a factor as well. Some people just hit at the perfect time and take off in a flash.

Are you in contact with metal scene in Europe? Do you know something about metal scene in Czech republic?
I just took my first trip to Europe a couple of months ago, playing guitar with the neofolk band Night Profound. I was lucky enough to meet and spend time with many fellow musicians in the places I travelled, through Denmark, The Netherlands, Belgium, France, and Britain. Most of the trip was a

personal vacation after we played our show, but I was really inspired to try and bring HARROW over to Europe, it seems more and more possible as days go by. Also, we are currently working with Avantegarde Music, who is based in Italy.

CULT OF FIRE is one of my favorite contemporary metal bands, but they are maybe the only one from your country that I listen to regularly. Of course we’re all aware of the legendary MASTER’S HAMMER too.

OK! What are your plans for the rest of 2015?
So far we have a show opening for the fantastic BÖLZER, October 18th in Vancouver. Besides that we’ll probably be a bit quieter for the rest of the year, most likely working on new material, as well as other projects.

Thank you a lot for your answers! All the best!
Thank you for your interest and your readers for reading!