Hello, im sure that this is your very first interview for Czech Republic and also that you are not well known band here, so how would you introduce Haapoja for us down there? In case of complete concept of band and/or the band name itself ?
We are a twisted hardcore/metal band from Oulu, Finland. We’ve been playing since 2007 and have released two records, Hallitsematonta Voimaa-EP in 2011 and our self-titled full length in 2013. Our musical concept is to completely forget about genres and how something’s supposed to sound, and
just make the best music we can. Our name comes from Matti Haapoja, who was a Finnish serial killer in the 1800s. There is no bigger significance behind the name, it just fits the vibe of our music really well.

Your band is one of those who’s members are holding it tight together. During all those years you are something like family, do you know each other from childhood?
Our bass player Eero and I have been friends since childhood, otherwise we didn’t know each other for that long before forming Haapoja. But we are close friends outside the band also, and I’m sure that’s one big reason we’ve been able to keep this going for so long. 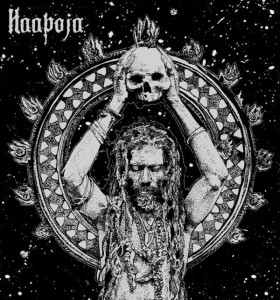 Under what cirumstaces was the band born, what was the initial intention, the intended message? How do you see the future direction of Haapoja, if you cast about these things?
I was looking for a metal band at the time, and our ex-guitarist Toni suggested that we should form a new band instead. He knew our drummer Tuomas, and I had already met our vocalist Jyri through him. Those guys came on board, and that’s how everything started. There were no bigger plans or
intentions at the time, and things are still the same way today. We just want to make some good music. Right now our goal is to write something even darker sounding than our last efforts.

Now, let’s talk about your debut for a while. Even though it was released in after the one year (2013). It still can seem new to a lot of the listeners, as they might have not gotten to your band yet. It’s impossible to forget ask you about your satisfaction.
We are very satisfied with the reception and recognition the record has had. Especially since we haven’t really done much to promote it, and everything has kind of happened on its own. This obviously wouldn’t be possible without internet and word spreading around in social media. It’s great to see that there is so much genuine interest towards our music.

When you started with HAAPOJA, did you know what kind of genre you would like to produce? How would you describe „Haapoja“ from music view? I think, that we can listen to very good symbiosis between crust black metal and death metal – core, rock : ) It’s amazing!
When we first started, the idea was to play death metal. But even then we didn’t really care about sticking to one particular style, and somewhere along the way we stopped caring about genres altogether. I quess it could be described as some kind of fusion between hardcore and different metal genres, but we really don’t think about this stuff a lot. Your description sounds pretty fitting actually, and thanks for the kind words!

What music do you enjoy recently? And are there any bands that inspired you during composing „Haapoja“, or that you wanted to approximate to?
Personally I’ve been listening to lot of hardcore lately. Also quite a bit of non-heavy stuff, darker kind of folk/country mostly. We always listen to so much different bands that it’s hard to pin down any particular influences. But Converge and Craft were a big influence during that time, to name a few.

How do you feel listening to your debut? What do you think of? Are you keen on listening to your own music?
I am still very happy with the record we made. It’s not like I listen to it very often, but the whole point of HAAPOJA is to make music we’d like to listen ourselves. So it’s fun to put on every once in a while.

Like it is usual for many youngs groups, „Haapoja““ is completely in your native language. Is it simple for you to write the texts in Finnish or you simply prefer Finnish in excess of English?
Little bit of both . Our vocalist Jyri prefers to write in Finnish, it’s more natural to him, but singing in Finnish also adds a distinctive vibe to our music.

How about your label? Is it clear now, or not?
We aren’t signed on any, but our next record will be released through a couple of different labels. So it’s clear now for the time being.

A lot of pepople say, than Finland is a pure „Metal land“! What do you think about metal mainstream bands? For example? NIGHTWISH, AMORPHIS, CHILDREN OF BODOM etc.
Mainstream bands like these were definitely an influence when we first started to play our instruments as teenagers, but we don’t really listen to that stuff anymore. Of course it can be fun to listen to sometimes for nostalgic reasons. 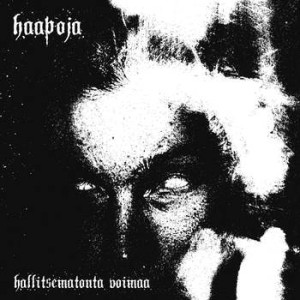 …but… How it is possible, that Finland is full of perfect metal bands? Did you think about it? With which Finnish band do you have closest relations?
I guess it must have something to do with the long winter, it would feel unnatural to make happy and cheery music when it’s dark and cold most of the time. We really aren’t a big part of the local scene, since we don’t play live much or anything.

You certainly get many reactions to the album, positive or negative. How do you receive negative critique?
Most of the reactions to the album have been really positive. But getting negative critique every once in a while doesn’t really bring us down, everyone’s entitled to their opinions and in the end we really make this music for ourselves. If other people like it, it’s of course a big bonus and we’ve been happy to see that they do.

What do you think about journalists writing reviews of your album? Are there some differences between Finnish ones and the rest of the world?
There haven’t been many reviews written by local journalists, since we aren’t really that active in promoting ourselves and we haven’t done any business with Finnish labels. But Finnish can be a bit different, since our music might be considered a bit weird by mainstream metal magazines etc. With the rest of the world we’ve always been reviewed by people who specialize in this kind of music.

Where does the inspiration come from to you? When we talk about inspirations, there is question about art comming. What other sort of art you enjoy (exept music, I‘ll ask on it in the next question), no matter what kind – movies, pictures, books or whatever.
Naturally everything around you inspires and influences the music you make, but this happens mostly on a subconscious level. Can’t say that movies etc. influence our music directly. When it comes to lyrics, this is a bit different of course. Just like everyone else we like to watch good movies, read, and my interest in tattoos has also got me interested in visual arts a bit. Eero is into comics, and has even studied them for a while.

Do you already discuss subject of future compositions in the band?
Yes, we are already composing new stuff and it’s going to be darker than ever.

Oulu is hockeytown. Are you a hockey fans?
Just like pretty much all Finns, we do watch hockey every once in a while. But we are not fanatic about it or anything. It’s mostly international level games that we are interested in.

Thank you for interview very much! Best regards from Czech Republic!
Thank you very much for having us, it was a pleasure!