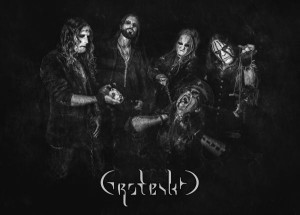 GROTESKH was founded by guitarist Malthus Holytoxicomaniac (HELLSAW) and guitarist Goreman (OBSCURE) in the year of 2010. Necrosodomizer (VOMITION) joined the band in 2011 and the perfect match for the drums was found in T. Martyr (IRDORATH) in 2012.

Together the band created their first album UNCONSCIOUSNESS in cooperation with the German Dreamsound Studios Munich together with Mario Lochert (EMERGENCY GATE). The album was released via Noisehead Records.

In 2013 almighty Isiul (HELLSAW) joined the band to strangle guitar strings instead of Malthus, who would only concentrate on the vocals of GROTESKH. A European tour with DEMONICAL followed in fall of 2013 as well as various concert and festival appearances.

2014 marked an eventful year for the band. Necrosodomizer left the band and replacement was found in Mike Hell (SAKRILEG / DISASTROUS MURMUR). In Winter GROTESKH entered the studio again to work on their second studio album “CODE: END”, which will be released via the Austrian label CURSED RECORDS on May the 15th 2015.