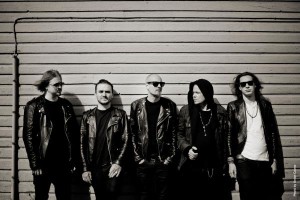 There are still those rare bands out there in the world that have a unique ability to combine macabre, mystifying rock with a more pop-oriented flare, a la early Bowie or early The Cure. GRAVE PLEASURES are such a band that is equally suited for playing on a stadium stage, or in some Lynchian nightmare. It’s that duality and electrifying contradiction that makes their music so exhilarating. “I try to write songs about the unexplored human darkness, of the nightmares but also the joys inherent in it. It’s about accursed attractions and making love to your nihilism. Misery loves catharsis.” says Mat McNerney – singer/co-songwriter of GRAVE PLEASURES, the most notorious modern day Finnish post-punk band.

“Our songs are about illumination through our deepest fears. Nuclear panic, the apocalypse and our eventual demise are intrinsic parts of our collective conscience. Within these obsessions we come to find the truth of who we are, and there is a certain magic and thrilling revelation in the horror of that discovery. Our music is a grinning dance of death.” Grave Pleasures’ debut album Dreamcrash was released in 2015 in Europe/ROW on Sony Columbia and Metal Blade in North America to critical acclaim. Risen from the ashes of the short-lived underground sensation BEASTMILK, the band’s new record reached out to a wide and diverse audience. In the album’s wake, they brought the sound of their atomic punk to such high profile festivals as Hellfest, Sweden Rock, Reverence Festival, Rockavaria, Rock Im Revier. They toured Europe extensively and recorded a BBC live session for Daniel P Carter’s Radio 1 Rock Show. They followed up in 2016 with the Funeral Party 7” to critics and fans delight alike, and which revved up the buzz and expectations behind a new full-length record from the band. 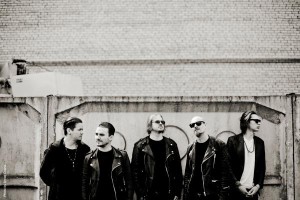 “Their songs serve up icy, dancey goth-tinged death rock, and temper it with an ominous apocalyptic obsession.” – Noisey Lead guitarist Juho Vanhanen (ORANSSI PAZUZU) steps up to write the majority of the songs together with British-born outcast McNerney (HEXVESSEL, ex- BEASTMILK/DHG/CODE). His screaming telecaster and unique interplay of discord and harmony has become a trademark of the band’s sound. Together with guitarist Aleksi Kiiskilä (ex – KOHU 63), their strings shimmer, hammer and howl out a web of sound which is distinctly GRAVE PLEASURES. Fleshed out by the hypnotic signature rhythms of Valtteri Arino (ex- Beastmilk) on bass and Rainer Tuomikanto frenetically pounding the funeral drums (AJATTARA, ex- SHINING Swe), this group of well established punks have started to reach up to their zenith on their sordid new testament Motherblood.Motherblood was recorded at Orgone Studios in the UK with Jaime Gomez Arellano (GHOST, ULVER, PARADISE LOST) in March 2017. The studio was suitably situated on the site of an old WW2 coding bunker and brought with it the isolation of the bleak British countryside. The setting helped give the album an intense and smiling urgency that picks up where 80s UK bands such as Magazine, The Wire and Echo And The Bunnymen left off, but never stopping long enough to look back too much into the past. Featuring guest vocals from David Tibet from Current 93, the band sets the tone for their inspirations, from the esoteric underground of England’s hidden reverse to Manchester’s sound of misery. With their own metallic raw tone clashed with pop hooks, Motherblood is a furiously passionate and contemporary record, which re-defines post-punk as a “war-cry for the eternally doomed.” 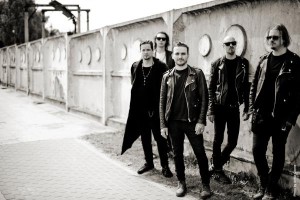 Following the recording, they were asked to support their heroes Killing Joke on a short tour of Europe during June 2017. Debuting upcoming album songs to a newly captivated and eager audience, Motherblood’s fallout had begun. Come Fall 2017, the album will be out and detonated, let loose upon the world by Century Media Records. “Aha, Duran Duran, David Bowie and even Billy Idol have all had a hand in this dark punky sound” – Newnoisemagazine.com

They have been described as “A post-punk wet dream,” or perhaps more honestly as “bat-shit lunatics,” and their music is in a funereal world of it’s own. Motherblood is a truly danceable, pop-feast of raw, banging pleasure – in all its primitive, gothic tribalism. Dance-floor death rock that brings with it an uncanny sense of inspired song craft that made Bowie’s Berlin era sound so fresh and revolutionary, Killing Joke’s tribal anthems so desperately ominous and dark throbbing melancholy of Depeche Mode’s atmospheric pop so damn sexy. Just about every part of this record bleeds menace, or emanates nuclear fumes. It’s unsafe territory which in turn makes it thrilling, sexy and most dangerously of all, catchy.