Hello! Your new album is really amazing! I’m still thrilled by it! Please talk about your feelings on the new album…
Dima: “Triatom” is next level of our mutation. We made one more step towards to electronic music and share most of our attention to synths. That synths lines not only fill whole mix and support guitars, but taking a leadership slot instead vocal. This is casual way for us to mix pretty heavy metal with psychedelic electronic tunes.

Serge: Moreover we mostly trying go far away from metal into misty deep.

Why did you originally choose the name EndName?
Dima: The sign “EndName” was born from old-school NIRVANA’s song “Endless Nameless”. Also there is an image of some kind of “place” – space, dimension and proper state of mind where names come to the end. Where mind is free from any words, notions and meanings. So, EndName invites you to instrumental trip into that “place”. Enjoy. 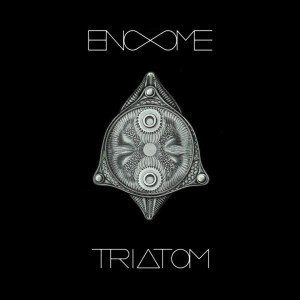 The new album is entitled “Triatom”. Name can mean different things. What is your interpretation of the title?
Serge: I proposed give a name for album as “SLEEPCORE” due genre we play. But making of album took so long time that the idea got rotten and finally was changed for something more actual.

Dima: “Triatom” for me is symbol of trinity. I mean our creative unity. Also there is some connection with album art. The cover is collage of Ernst Haeckel’s art from his book ”Die Lebenswunder  (The Wonders of Life)” 1904. That thing on the cover is diatom’s shell – one of the ancient inhabitants of our planet. Also diatoms (algae indeed) are base stone for album’s name.

Your new record… It’s one wide way, one big adventure for senses of listeners… Do you feel the full it like me?
Serge: And exactly the hard way. This is our casual size 72min for album. I know just a few people who able to seat and listen more than 1 hour of such music serially. However… just need a right mood. Recently I had put our CD on my stereo and start to thoroughly listen – I fall in sleep somewhere in the middle of the record and awoke in the dark after sunset during last track in total horror. Where am I and what’s going on?! Very impressive album. 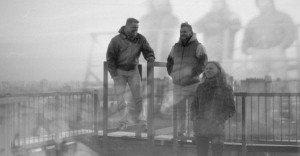 Some passages on the record were made by improvisation? Was your goal to make the record sound this way and to create something strange and racy?
Dima: Sound producing took a long time. We search…mix…finalize all parts three years. It looks we got quite special sound. With some kind of mist and mystic I guess we got exact narrative. For this time we gone away from album-to-album tradition to make one improvisation track and had put closing “Triatom” instead.

Serge: Need to say, this is our first release when we reject any improvisation at all. Everything measured, calculated and built along schemes, with no any wondering. But we also there is prominent work from our forth band member – Alex Merganov, who was busy as our mixing engineer and producer. He added to stuff many soundscapes, keys and extra live noises. But our vision of final mix often diverge with his. So finally the album full of conflicts, compromises and backups… and whole album sounds really strange. Looks we approached to our goal. 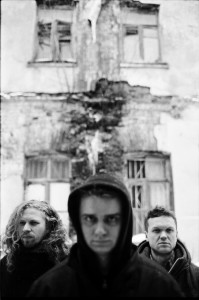 The song “Triatom” is also one of the hottest of your new album. What did you’ve in mind when writing this track?
Dima: The main track I guess is compilation of all electronic ideas from this album. The most electronic track and meanwhile still with much low guitars. During writing I kept some psy-ambient acts on my mind.

How do you get the ideas for the speech samples?
Serge: This is amazing idea. I noted trend in modern IDM music with wide spread use of compilation from speech samples. Need to say such teсhnique can add much more vivacity to any kind of music. Regarding us…on “Triatom” we used just one human sample, but I guess really prominent) It’s a bonus for everybody who was able had listen album to the end.

Could you tell us a bit more about how post-metal music influenced you as musicians? What other bands (if any) can you point out in terms of influence and inspiration for EndName?
Dima: Definitely post-metal bands had gave me prominent impression when that wave came in Russia. But most impressive was news that we making something like this for years even without idea about this. I remember my first listening to PELICAN when I discovered many common tunes with our stuff! It was before EndName age… In that times we play long improvisation performances as guitar & drums duo. So about inspiration…influence not only from certain bands, but from whole massive of listened music during current period. Funny thing. While I’m writing these lines, among long silence in my room suddenly appear “Atom Heart Mother” from my friend’s laptop… Coincidence?

Serge: My influence is SHPONGLE. But it’s exactly not post-metal. 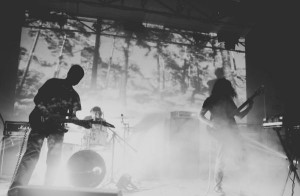 Is there any producer you would just love to do an other album with?
Dima: Would be really cool to cooperate with man like Rick Rubin. But to work with somebody from EDM planet also sounds good.

Serge: Dima, please send our CD to Rick, I’ll give you address))
I had read somewhere when MASSIVE ATTACK make album Heligoland the progress took a really long time. And finally 3D (band member and producer) again not satisfied by done stuff, just sent folder with all tracks (few years of hard band’s work!) from studio computer ‘s desktop to a trash bin. And start all record from beginning. I guess we definitely need such radical guy for next record.

The whole Russian scene has a lot of interesting new bands. Do you sense some kind of rivalry or is it more like teamwork, helping each other and so on?
Serge: Yeah, we know many of that guys. And having beer with some of them from time to time. There are really amazing bands. But exactly no any competition, because there is no aim for this. All this genre stay in deep underground here. Just small club shows. Sad, but no one local stars appeared for years who can get prominent crowd on his show. Heh, we even have no any metal open air festival here. As I can see listeners need something else nowdays…

How important is the contact to your fans?
Serge: Once during tour deep in Russia some drunk guy invaded into our dressing room just before the show. After short inarticulate speech he pulled out a bag full of money and start to throw banknotes toward us exclaiming “Play! Just play, guys! Let’s play this show for me!!”. Unfortunately, venue’s security removed this hero outside. It was great contact with fans!

And what about live performances?
Serge: To be honest no any tour planes at this moment. Usually one year we tour massive and then have a hiatus for one or two or three years in row. And even almost not communicate each other. So…our tour year left in 2016) Thereby need to prepare for looong vacation.
Anyway. Our band’s mail noted on official page still active. I promise all interesting offers will be examined.

Big thanks for the interview and I wish you many years of quality music. Finally, this is your message to your Czech readers, what do you have to say to them?
Serge: Thank you for opportunity. We always glad to chat and virtually chin-chin with our beer mugs. I recommend all readers visit to Russia. Here is really interesting within all aspects.