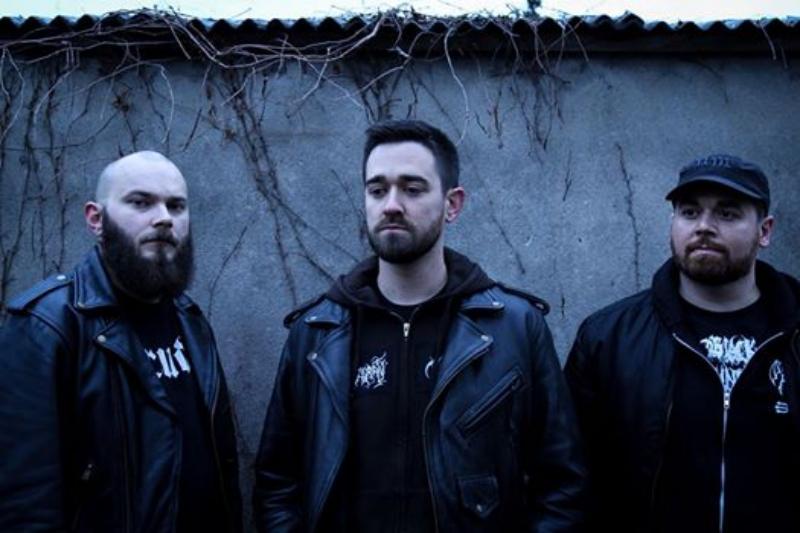 Hi! Your current recording, which deservedly earns commendatory reactions, is the debut “The Lesser God”. How do you look at this album today, with some time lapse?
Greetings! And thank you. I think we are all pretty content with how “The Lesser God” turned out. This was the first recording of the band that we did not accomplish ourselves, so I think we were all curious as to what someone else’s take on our sound would be. The goal was to make an album that was unequivocally Black Metal and also one that would take you on a journey and be cohesive in that way. I feel that we mostly achieved this. We weren’t used to everything being so… clear at first, so I think there was some concern initially that it would not sound as organic as we intended, but the more time goes by, the more we appreciate the overall sound.

I cannot not to ask about the name of your band. Why just DUMAL?
DUMAL… well the name was perfect to us. Three meanings are contained: an odd conjunction of French “of evil,” as in Le Fleurs Du Mal, showing our appreciation for the French take on dark and subversive art. Another meaning is a path lined with brambles or thorny plants, such as the left hand path could be considered. And finally the name is a caste surname, I believe, which translates as a length of knotted rope, showing unity of some sort. Three meanings, three members of the group, and a succinct moniker that is simple and memorable. I suppose it can also be viewed as a mocking of the trinity or the three Abrahamic religions, but that is just a passing thought.

The album “The Lesser God” continues in a similar style of music as it has been in the past, but at the same time there is a certain diversion. I mean the fact that, for example, while EP “Piety & Iron” was characterized by darkness and anger, currently in your songs have also found place a much more refined and majestic atmosphere. Do you agree with that?
I would agree, yes. I think part of the rage of earlier releases could stem from our own limited recording facilities/abilities and maybe the frustration we experienced in attaining a proper sound, haha! But in retrospect, yes I think there was a certain unhinged fury on the older releases, even on more “laid back” songs, such as “…Deep and Lonely Grave.” This could also come from the amount of focus that we put into creating and refining “The Lesser God” as well. We never really set out to make a certain type of song with DUMAL, as long as it is Black Metal. So this might also contribute to the variation between old and new material. The material we are working on now for the follow up is quite varied, yet still consistent with DUMAL’s mission. 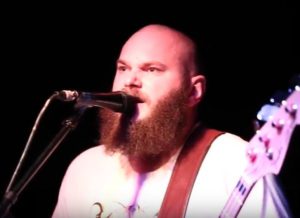 Yet to the previous question: How do you create new material? Is the technical aspect decisive for you, or do you just subordinate everything to the resulting atmosphere?
We’ve been very lucky in that creating material has been very easy for us thus far. I think this comes from the three of us being great friends first, playing in bands together previously second, and all having a similar vision for the band, as well as a similar ear for what makes high calibre Black Metal, third …and fourth. Technical aspects… well, I think we would all agree that the resulting atmosphere and painting of a mental picture surrounding said atmosphere is far more important than how many notes or key changes you can stuff in a few measures.

Is the composing process a collective work or is it an individual activity? Who is the most active in this respect?
We all write for DUMAL, and pretty equally at that. In fact, practices usually rotate between our live setup at the rehearsal space and a “three-guitar with combo amps” roundtable at one of our apartments. As far as composing a song goes, it can be that one of us writes a full song, or we might piece something together from collective riffs. The final touches and structure/tempo decisions are almost always made as a full band once we have rehearsed or demo’d a song at our compound. 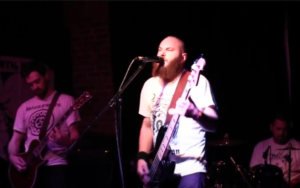 Concerning text focus, one of the songs is out of the whole. I mean the song “Ukrainia”, using the work of Ukrainian poet Taras Shevchenko. What led you to this step?
We often look to faraway places for inspiration. On our first demo, we have a song called “Hail to France,” and here we have “Ukrainia.” These songs are our way of honouring the places that inspire us musically and otherwise. It may seem strange for an American band to so fervently admire and talk about other countries, but that is where the style of Black Metal that we aspire to create comes from. We have no particular patriotic American feelings and are unbound when it comes to where we can write about – even if it’s not our homeland. The poems of Shevchenko were used because of his great writing and style, and we simply used his words in describing his own homeland. Anything we wrote about Ukraine would fail in comparison to his descriptions and musings.

You released the album “The Lesser God” in the form of a cardboard sleeve CD, with its second press already being sold out. Do you plan to continue spreading this album this way, or is it scheduled to be released under some label? Is a vinyl version of the album in plan?
The cardboard sleeve CD version that we released on Evan’s label, Draigfflam Productions, was purely to get a physical copy out there to complement the release. We had no idea that there would be such a demand for a physical copy, as we have burned through 200 copies in a very short time. The outstanding Greek label, Underground Soundscapes, has also pressed a beautiful cassette edition of “The Lesser God” limited to 100 copies, which I believe is still minimally available but almost in the history books as well. We are currently talking with a few labels/individuals about a proper release on CD/Vinyl formats, and I am hopeful that the finishing touches will be put on the release specifics soon. Like everything else with this band, it has to feel right before we dive in headfirst. 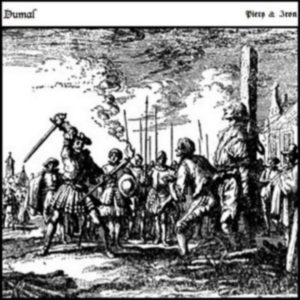 What about DUMAL and live performances? How often and under what conditions do you play live? How does your playlist look like?
We’ve played live a good amount in the Northeast region of the U.S. thus far. Some highlights have been Pray for Death fest in Connecticut (R.I.P., Ezra!), a show with legends Abazagorath in our home state, and we recently played as direct support for Behexen in Brooklyn, NY. We also have some upcoming gigs that we are very excited about, alongside USBM originators such as PROFANATICA, DEMONCY, and BLOODSTORM. We try to limit shows to once every few months or so, as we are all quite busy humans. I also think playing live too often is a detriment to a band in some ways. That being said, we are very open to expanding our range of live performances and are looking to take part in some festivals and out of area excursions in the near future. Our playlist is usually catered to each show, as some songs may feel more appropriate in certain settings. We try to not play the same setlist twice, but there are songs that more commonly make the setlist than others. Recently, we have been playing two or three songs from “The Lesser God,” and then a few others from the older releases, and a brand new song as well.

If you compare domestic UG scene to the European scene, in what do you see the biggest differences? Which bands from your surround would you recommend?
As I have seen it, I feel American—specifically USBM—bands can sometimes not quite capture the atmospheric and melodic sense of much European (or non-domestic) Black Metal. Instead, they seem to opt for a style rife with pure rage, brutality, ultra-Satanic or warlike, or some sort of hybrid thing (Black/Doom, Black/Death, Drone, etc.). There were/are of course many exceptions to be found through the years, as I’m generalizing here. That’s also not to say that many of these domestic acts aren’t still worthwhile and highly enjoyable. Just a different take. From our immediate area, I would recommend checking out NECROSCYTHE, WINDFAERER, WOLFCLOAK, ENTHAUPTUNG, ABAZAGORATH, T.O.M.B., BLACK PARADISE, MORTUM, THE BEYOND, DECIEVERION, WORTHLESS, OZAMA, KHOLERÄA, and I’m probably a ton I’m not thinking of at the moment and will regret not mentioning later. The scene in the northeast U.S. is currently quite ripe.

Besides DUMAL you are active also in many other projects. Can you briefly tell something about these names?
The main active band at the moment is Plague Lust, which Adam and Evan take part in. That band is classic U.S. Death Metal in the vein of bands like CANNIBAL CORPSE, DETERIORATE, MORPHEUS DESCENDS, BAPHOMET (NY), etc.. We formed the band with some local and like-minded musician friends, and we currently have a CD release available through Dullest Records (PA). Andrew and Evan have solo projects, MODE OF EGRESS and THESTRAL respectively, which are always active. However, DUMAL has taken a lot of the creative energy from those projects to this point. HOLLENLARM is our previous group but is more or less active for a few more shows if warranted; this project was more of a band of friends who enjoyed drinking and writing ugly songs together, but it became more serious with time. There are and will continue to be other projects as well, as we are all quite restless musically (despite being busy humans).

Do you have any idea about next focusing of the DUMAL? What direction should the new creation go comparing to „The Lesser God“?
Our new album, “The Confessor,” is almost completely written, so the next steps will be demo-ing and recording that material. We also are open to releasing more splits/EPs in the future, either before or after the release of album #2. The next songs will of course sound like DUMAL, but we are exploring some other moods and approaches with this material. Expect something a little different, but still well within the realm of Black Metal.

Thank you for interview. Something at the end…
Thank you again for reaching out and for giving us the chance to speak on DUMAL and our process. Hails to you and to Rumzine. Wishes of continued success and perseverance to both you and this publication.