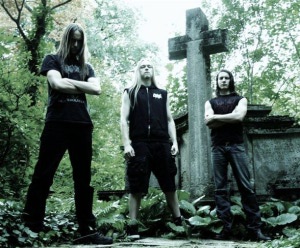 Thuringia ́s DESERTED FEAR are one of the best and most talented death metal bands from Germany, crafting their vision passionately and merciless since 2008. Their debut album “My Empire” (2012) blew up a lot of dust, DESERTED FEAR are on their way to become one of the most important forces in the European metal scene. Germany ́s ROCK HARD magazine praised the album as “…simply amazing how the whole albums offers it ́s permanent hit potential. If it ́s allowed to say so within the death metal world. Great start!”

DESERTED FEAR are now back with their new album “Kingdom of Worms”, which was recorded in June and July 2014 once more at Eisensound Studio in Eisenberg (Thuringia / Germany) under the knife of guitarist Gitarrist Fabian Hildebrandt. Mixing and Mastering duties have been handled by legendary Dan Swanö (EDGE OF SANITY, BLOODBATH, etc.), who put the finishing touches on “Kingdom of Worms” in his very own Unisound Studio.The dark and atmospheric artwork for “Kingdom of Worms” was once again created by Thomas “Necromaniac” Westphal and it perfectly fits to the music.