How are things with DÉLUGE at the moment? What are you doing right now? Oh, and don’t forget to introduce yourself!
Hi, I’m FT composer / guitar player of DÉLUGE and I am pretty much answering to this ITW on my laptop at the moment.

Whose idea was it to name the band DÉLUGE? What’s the story behind the name?
At the very beginning I didn’t know at all what our music would sound like. I only knew I wanted something truly honest, intense and always melodic with heavy guitar parts that would sound like a massive & melancholic rain. DÉLUGE came out as a name very obvious.

What events inspired the material on this debut album?
Mainly the hardships and different steps our lives.

What has been the best and worst parts of recording and releasing Æther?
The worst part was to record it, the best part was to release it. It is a joke but not so far from reality. We really spent an indecent amount of days in the studio trying to find the perfect sound at the right moment for every part of each instrument. It was a very interesting work, but it was truly exhausting. But the feeling of accomplishment when we had the final material was pretty real.

Sound of record is massive and strong. Are you happy with how the album sounds?
Absolutely. It was our first important discussion as a band.

How do you analyse the lyrics? Why are they written like that?
This is simply the easiest way for us to create. French is a rich and complex language. Our singer has actually a lot of things to say. We use a lot of metaphore and we like it that way. I’m sure a lot of people will find themselves in the lyrics, they are totally open to interpretation but their meanings are very specific for us.

Interesting collaboration that comes to mind is on track “Mélas | Khōlé”. Can you talk about how this happened and working with Neige?
Valnoir (the guy behind Æther’s artwork) introduced us to Neige and we became friends very quickly. He is a very talented and nice guy, very professional. And he insufflated a brand new breath on Mélas​|​Khōlé, the third song of the album, with his unique voice.

What do you feel is the most important part of innovation and evolution of music?
I think that when you start a band, an album or even a song, you should ask yourself : „Is that better that the band that influenced me ?“ or „Would I listen to it / go to a show / buy the album ?“. If the answer is no, then start again or don’t do it.

What do you think of the following statement: classical Black Metal is dead and there will be no more innovative albums. I mean, the classics have been written already…
As most of our listeners would understand, we are not deeply rooted in the traditional Black-Metal scene. And so I am probably not the best guy to talk about the future of classical Black Metal. What I can say, and I actually find it funny, is that many traditional BM bands don’t sound as „trve“ as some modern „blackened“ bands, like the excellents Young & In The Way for example.

What do you think about black metal in France? I think that your scene is very rich and interesting. Do you agree with me? Any friends within the metal scene in France?
I do. We played our 3 first shows with the guys of CELESTE and we are very good friends.

Are there any French bands who influenced you?
When I started composing for DÉLUGE, I discovered Deafheaven’s Roads to Judah, they are not French but I definitely found it inspiring and I also felt that some parts could be more melancholic. I am also a big fan of Post-Hardcore with bands like CELESTE or AMENRA, I tried to mix these influences and make something powerful, melodic & modern. I also think that ALCEST really created something huge in that scene, well they actually almost created their own scene. 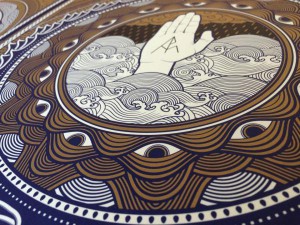 What are your ambitions for the band? Any particular things you’d like to achieve with?
We really put all we had in this album and we can’t wait to see where it is going to lead us. We want to play live as much as possible.

Ok, so French fans make the best audience. Have you been gigging much outside of France?
Well, I’m not sure the exoticism of that destination count much (even if we loved that show very much) but we played in Luxembourg with GOJIRA on the last day of their summer tour.

Have you already written new songs?
Future releases are not planned at the moment. Æther as been a lot of involvement for all of us and a big piece of work. I have some more material in my head but we really want to tour as much as possible for now. And I also want to really take time for the next release. We have a lot of shows booked for late 2015 & 2016.

Thanks for taking the time to do this.
Thanks.