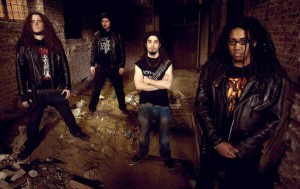 Belgian death horde DEHUMAN have unleashed the Metal of Death upon France’s VS-Webzine with the global premiere of “Crypts of Death,” off their forthcoming album Graveyard of Eden.

The song is a raging piece of uncompromisingly fast, epic and vicious slab of take-no-prisoner Death Metal that mixes the best of both the old-school feel and modern production and musicianship. Fans of old-school Pestilence, Vader and Suffocation will be served a (bloody) plate of first choice cuts. Stream “Crypts of Blood” now at this location.

Produced at both the Blackout Studio (Enthroned, Emptiness) and Sainte Marthe Studio (Arkhon Infaustus, Deep In Hate, Department of Correction), “Graveyard of Eden” is the follow-up to the band’s 2012 debut Black Throne of all Creation.The album will be released on March 9 (world) and March 10 (North America and digital) as a limited-edition deluxe DigiSleeve CD. Vinyl treatment – white collectors vinyl (100 copies) and stadard black (400 copies) – will come on April 13. Preorders for the release will begin February 9 at Kaotoxin.com.

DEHUMAN will celebrate the new album with an official release party on March 13 at Le Biplan in Lille (Facebook Event) with label mates Savage Annihilation and Infected Society. Shortly after, the band embark on a Spanish tour with Hungary’s GraveCrusher and Spain’s Riot of Violence. Tour poster can be seen below.