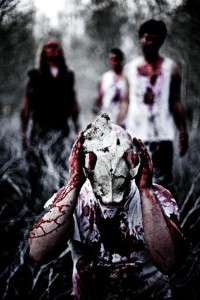 Death metal band DEATHFARE started torturing in the suburbs of Stavanger, Norway in early 2000. After a couple of EP`s and live appearances the band went into silence, before appearing again from a humid basements with its newest victim, the debut album, «shotgun surgery.

Covert with bruises from American death metal and hung from it testicles with an iron hook. It`s a must have in Guantanamo sound torture library. Released on CD by Heathen Tribes Records. The 36:41 minutes fare in the fright train of pain, nicely body-bagged in plastic for the hands-on surgery experience… Attila Csihar is picking up the shotgun too for 04:05 minutes on this one… Beware!