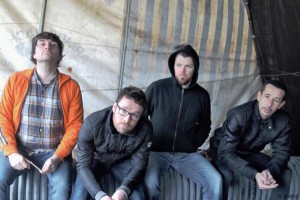 “Following the release of their abrasive debut EP «Amen», DEATH ENGINE made a brutal entrance in 2013 with a couple of European tours – a string of infernal outbreaks that have little in common with your average live show. The now four-piece from Lorient, France spent most of 2014 working on their debut album «Mud», which was once again recorded by Amaury Sauvé at La Senelle and mastered by Sylvain Biguet.