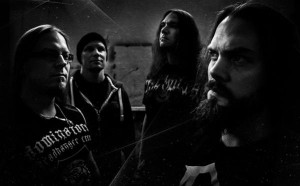 Celebrating their 10th anniversary next year, the melodic metal quartet DEAD END FINLAND will release their third full-length album worldwide on the 4th of November 2016 via Inverse Records. The album bears the name “Slaves To The Greed” and continues on the same path with previous albums, but taking all the musical dimensions even further and deeper.

Slaves to the Greed´s production value is top notch, no wonder it took over two years to get this album done. Each instrument and each sound were perfectly validated. With number of tracks reaching over 200 in some songs, the sound of this album is absolutely massive.

Slaves to the Greed was recorded, like previous albums at the prestigious D-Studio and we are so very pleased with the result. The sound is fuller and heavier, however crystal clear and dynamic. We really hope that the album is listened to as a whole, because it has been built that way. Still it is not exactly a concept album and every track has it´s own story.

We recommend to put your headphones on and spend a joyful 45 minutes of listening. We hope that this album will reveal something new every time you listen it. There’s maybe not any hidden messages when playing it backwards, but if you turn it loud and play it with 150db volume, it sounds louder than Jumbo jet.