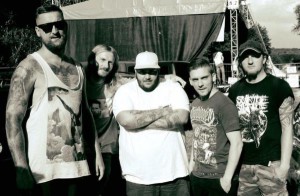 The powerful band STERCORE, which produces a very straightforward deathcore with death metal influences, has launched a new video with the aim to attract the fans for the band’s new material. The video was produced for the title track “Eternal Sunlight”, which brings on the scene the eponymous EP “Eternal Sunlight” in November 31 via Slovak Metal Army label. STERCORE are releasing new material four years after their debut album “Fake World”. Their music offers a huge energy, which will tear off pieces of flesh from your body and bury you alive. STERCORE is focused on the presentation of their deeply hiding feelings, which then are exploding on the surface like an atomic bomb. Be careful, the new STERCORE EP “Eternal Sunlight” will be out soon! More information you can achieve from STERCORE web pages, label Slovak Metal Army web page, or via news from Grand Sounds PR.

STERCORE BIO :
Stercore was formed in 2012 and after only three months band releases their first demo “Raven Nest”. In autumn 2012 band introduces second guitar held by Peter K. In 2013 band released LP “Fake World” under label Rest Of Noise Productions after which band recorded four-track CD “Suffer” that came out in 2014. A year later band released promo “Die Without Sins” while band still worked on the new material and played a couple of festivals and gigs around the middle Europe. In about five years Stercore supported bands such as AFGRUND, MUMAKIL, EXHUMED, HOLOCAUSTO CANNIBAL, BENIGHTED, BRUJERIA, SOULFLY, PWD, My Autumn and many more. At this point band introduces new members on the bass and drums to work on the new album that is to come out around April/May under the label Slovak Metal Army. This LP is to be named “Eternal Sunlight”.