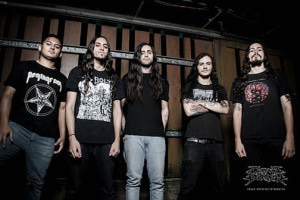 Costa Rican Death Metallers CORPSE GARDEN will release new single “Suspended Over the Abyss” for purchase digitally on September 23 on i-Tunes, Spotify, Amazon, Google Play and other digital retailers. The song is now streaming at this location.

The single comes from upcoming sophomore full-length album Ecdysis for which the band is currently seeking a record label to release. Interested parties should get in touch with Jon@theflamingarts.eu.

The new single is representative of the band’s old school, technical Death Metal sound combined with progressive passages, killer solos and dense atmospheres.”Suspended over the Abyss” reflects the band’s new direction, due in part to lineup changes and musical growth since guitarist Esteban Sancho, bassist Carlos Venegas and vocalist Felipe Tencio joined the band. Ecdysis was crafted from December 2013 to May 2014 in Bushido Audio Productions in Costa Rica; it was recorded, produced and mixed by Juan Pablo Calvo. Album artwork was created by Alexander L. Brown of BNB Illustration and Design based on the concept provided by the band.

According to the band: “Ecdysis means the shedding or molting of an outer layer of skin particularly on snakes, it means transformation for us. We shed our skin and changed our approach to music in every aspect and this is what we wanted the album’s cover and title to reflect that. The concept is based on the steps of Solve Et Coagula, the alchemical process; making reference to Carl Jung’ studies of the collective unconscious, psychology and alchemy. This conceptual piece is crafted to capture the journey through all the stages and emotions finding the underlying patterns of order in darkness and nature of the psyche.” CORPSE GARDEN is a death metal act hailing from Heredia, Costa Rica. It was formed in early 2008 due to the dissolution of a gore/grind band. In 2009, they recorded a demo and in 2011 they hit the studio for the second time to record their debut album Burnt by the Light in Bushido Audio Productions with Producer Juan Pablo Calvo. The album was mastered by Jens Bogren at the Fascination Street Studios in Sweden where bands like Opeth, Katatonia, Bloodbath, Amon Amarth, recorded. Burnt by the Light was released in January 2012.