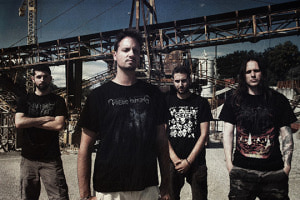 After countless delays, the long awaited and highly anticipated new release from SEPTYCAL GORGE is ready to be uncaged! Scourge of the Formless Breed will be self-released by the band in Europe on September 5 and the U.S. edition will be released by Comatose Music on October 14.

Scourge of the Formless Breed marks the third full length album during SEPTYCAL GORGE’s 10-year reign of destruction in the Italian brutal death metal scene. The track listing for both editions is identical. However, the packaging will be different. Musically this new release is a flawless execution of technical prowess that is superior in the genre. The album was recorded, mixed, and mastered by the band. Expect no mercy during the relentless assault that is Scourge of the Formless Breed!

Pre-orders for the European edition are being accepted now at http://septycalgorge.bigcartel.com/ . The European version of the album will include a very limited special slipcase edition that includes a shirt, poster, sticker and guitar pick. Pre-orders for the U.S. edition will be available August 18 at www.comatosemusic.com

1. Living Torment of the Sleeping God
2. Urizen – The Burning Sun
3. Slaughter Conceived
4. No Spawn No Reign (Sons of Enoch pt.1)
5. Breed of the Rejected (Sons of Enoch pt.2)
6. Anabasis / Paralysis
7. Deeds of Eternity
8. Coil of Nothingness
9. Awakening of the Seven Serpents