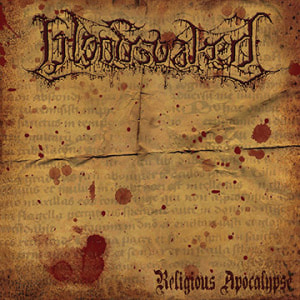 BLOODSOAKED returns in 2014 with new album Religious Apocalypse to be released September 2 on Comatose Music. Now with the addition of a second guitarist BLOODSOAKED are ready to annihilate all that is holy with their old school storm of ravaging ferocity.

Religious Apocalypse contains new tracks, live cuts, and surprise covers of RATT’s “You’re in Love” and CINDERELLA’s “Shake Me!” BLOODSOAKED has mastered the craft of combining the classic death metal feel with precision modern production to create a supreme blend of total sonic destruction. See BLOODSOAKED on their US tour in November 2014 and European tour in April 2015!