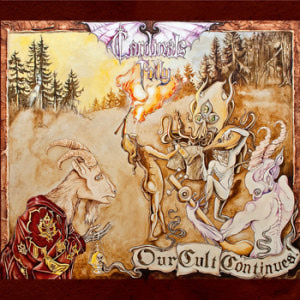 Doom merchants CARDINALS FOLLY have teamed with TheObelisk.net for the debut of a new track off of the band’s sophomore album, Our Cult Continues!

Even more memorable than the well-received debut Such Power is Dangerous!, the new album is a step up in every way, not the least of which occurs in the songwriting department. You may even detect bits of the sound of albums like WARNING’s Watching from a Distance and 40 WATT SUN’s The Inside Room creeping in from time to time. If you’re into collecting underground Doom Metal, check this band out. Fans of CATHEDRAL, REVEREND BIZARRE, and WITCHFINDER GENERAL must absolutely hear this album. Out Cult Continues! comes out August 19 on Shadow Kingdom Records.

“Our Cult Continues! melds hammering doom riffs with melancholic black metal influences, resulting in one of the more varied traditional doom releases to have tickled my eardrums recently. Certainly worth an hour of your time if you’re a doom monger, or if you want to know what CATHEDRAL would have sounded like if they’d developed a Burzum fetish.” – Angry Metal Guy

“With a great high quality label behind them in Shadow Kingdom the writing in on the wall, this band should be and deserves to be huge in the doom underground.” Doommantia