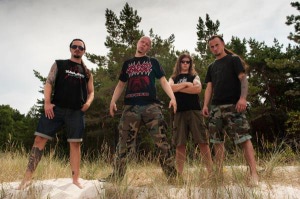 Polish death metal squad CALM HATCHERY have finished work on their new full length.The album entitled “Fading Reliefsâ” was recorded, mixed and mastered at famous Hertz Studio (BEHEMOTH, VADER, DECAPITATED, TRAUMA) during 2013 and 2014 and includes eight songs of top quality brutal death metal played with highest technical skills. This will definitely appeal for all fans of MORBID ANGEL, HATE ETERNAL, NILE, IMMOLATION. “Fading Reliefsâ” is the most diverse, mature and the best material the band have to offer in their career.

CALM HATCHERY was formed in the beginning of 2002; after releasing demo tape and debut album the band have signed to Selfmadegod Records. The sophomore album “Sacrilege Of Humanity” has received amazing feedback both from metal press and fans all around the globe; the band have toured few times supporting VADER and such.