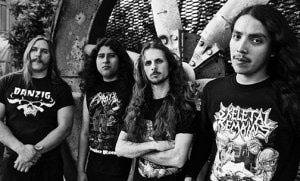 Thrash/Death Metallers MADROST (pronounced Ma-Drost) will self-release its sophomore album Into the Aquatic Sector on digital and CD format September 23. The album will be available for purchase on CD Baby, Amazon, Bandcamp, and i-Tunes.

Into the Aquatic Sector is a mighty step forward in terms of progression and songwriting from 2012 debut Maleficent. MADROST is a four-piece band based in Lake Forest, California. Formed in 2007, MADROST has since made themselves known in the underground Los Angeles and Orange County metal regions, hungering to take on the four corners of the globe. The musical dynamics heard on Into the Aquatic Sector is the result of hard work, dedication and a lineup that is firing on all cylinders.