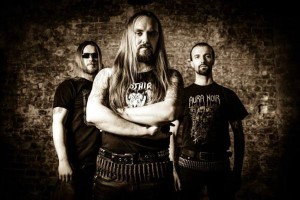 Bloodthirst were formed in 1999 in the Goat City of Poznań, Poland. After a few demos and split releases they have signed to the highly acclaimed Pagan Records and released three full-length albums: Let Him Die (2007), Sanctity Denied (2009) and Chalice Of Contempt (2014). Their sound is based on the classical thrash pounding but also widely influenced by black and death metal of the 90s. Over the years they have proven themselves in the metal scene to be one of the most respected Polish black/thrash ensembles which in turn led to opportunities to perform with cult names such as SAMAEL, DESTROYER 666, NUNSLAUGHTER, AURA NOIR, KAT, VADER and other respected Polish bands. Never part of the pathetic old-school hype, always spitting in the face of the modern trend, the four emissaries of hellfire and malice, have trodden their own path of Hateful Antichristian Thrash. Having solidified their current line-up (with Gregor handling the second axe since 2015), holding their heads up high and proudly drinking to the diabolical, Bloodthirst are ready to unleash Glorious Sinners.