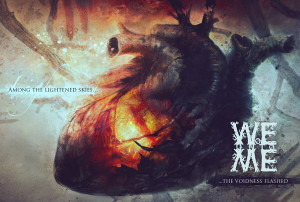 The working process on the successor of the debut “A Step Into The Waters Of Forgetfulness” (released by Solitude Productions in February 2014) is almost finished, all the instruments and vocals are done. The recording process took place in MONROE SOUND STUDIO (Poland) with Arkadiusz “Aro” Jabłoński (Shadows Land, Masachist) as a sound producer, known for his work with such bands as: VESANIA, MASACHIST, DISLOYAL, SHADOW LAND, etc. “We’ve been experimenting with sound really a lot and we’re absolutely happy with the result that came in the end, the time was well-spent.” – the musicians say.

A few words about the album itself: the material for it appeared to be so vast and diverse that the band decided to divide it into two parts, so this is going to be a Double Album. Musically, artistically and in general content both CDs will be radically different from each other: the first part plunges the listener into a dark and depressive atmosphere of doom metal in its various shapes and will include 5 songs, the second one is an acoustic melancholy, which will envelop you with a blanket of autumnal gloom and sad beauty, consisting of 7 compositions.

WOE UNTO ME reveal the cover of their second opus which will be entitled: «Among The Lightened Skies The Voidness Flashed», continuing to cooperate with the artist – Lenore Ani:
(http://www.be.net/Aniartworks, http://www.facebook.com/AniArtworks).

The band also posted the whole track-list for the upcoming album:

«Among The Lightened Skies The Voidness Flashed»

CD1:
1. Triptych: Shiver, Shelter, Shatter
2. Of Life That Never Showed Its Face
3. I Come To Naught
4. Breath Of A Grief
5. Drawn By Mourning

The band also claims that several famous representatives of doom metal will make a guest appearance on the album, whose names are going to be revealed in the nearest time.

«Among The Lightened Skies The Voidness Flashed» is planned to be released via Solitude Productions in the second half of 2017.