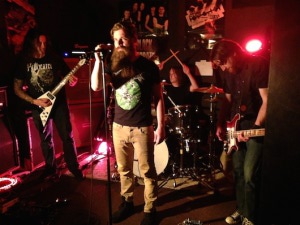 Guitarist Matt Price comments: “I met Jordan through some friends at a Mastodon show. Came to find out we had a few mutual friends, and that he was a vocalist and actually did a bit of vocal coaching for the heavier styles at Musicians Institute.

I took a lesson from him and brought our CD, Defender, Redeemist. I got a call from him about a week later. He loved the album and wanted to audition. At the time our new bassist, Cas, was in Europe with Sasquatch and our drummer Chase was filling in for about a months worth of Castle’s North American tour. So we had to wait a few weeks to give it a try. But when we did it was obvious the chemistry was there. He sounds great on the old stuff, and his range is great so he’s taking the new stuff into even darker gnarlier territory! We played our first show with him and it went great! We’re pretty fucking stoked and are in full writing mode. We’re hoping to be recording in very early 2015 (we’ve been talking to Billy Anderson and he’s 100% on board).”

Read more on the new BEHOLD! THE MONOLITH line up at GeeksOfDoom.com