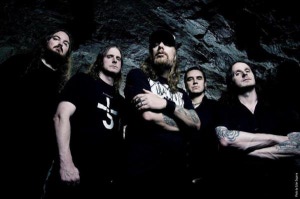 AT THE GATES are one of the most important bands in the history of death metal. But, with that sort of reputation comes expectation and pressure. Especially when you are dealing with the band’s first new studio album since 1995. “What we wanted to do was to be old school, but to ensure everything was also up to date,” says vocalist Tomas Lindberg. “Because we didn’t want to be rooted in the past.”

The Gothenburg band have been careful not to raise fans’ hopes for a new album since they reformed in 2007, 11 years after splitting up. When they did return, it was with the full classic line-up, namely, Lindberg, guitarists Anders Björler and Martin Larsson, bassist Jonas Björler and drummer Adrian Erlandsson. But, for a long time,the five-piece were careful to distance themselves from any thoughts of new recordings.“We decided about a year ago that we would do a new album,” reveals Lindberg. “But we never went public with this for a while, because we didn’t want to put any demands on ourselves.”

But slowly, the band assembled the material for new album ‘At War With Reality’. The actual writing process was fairly straightforward, but what took time was getting the song structures and arrangements exactly as they wanted them to sound. At no stage did the band rush the process, but through the exchange of ideas by email and person, it all took shape. All of the riffs and melodies here came from the Björler brothers, with Anders being responsible for 70 percent. And lyrically, there’s a concept at work, which again differentiates the material here from the four previous records.“It’s not that I’ve come up with a storyline that runs throughout. But there’s definitely a theme. And this is Magic Realism.”

Magic Realism is a sub-genre of surrealism, where magic being cast as part of everyday life. It’s been best defined as ‘what happens when reality is invaded by something too strange to believe’. “I’ve been reading a lot of 1950s/60s South American authors in this genre, and felt this idea could be adapted to fit into the world of death metal. So that’s where my lyrical inspirations come from. And, throughout the songs there are hints acknowledging some of the writers I have read. Yes, the lyrics are ambitious, but they are also a return to the early days of the band when the words had a philosophical edge and depth.” 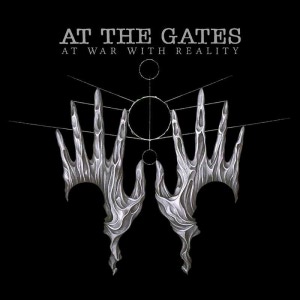 The challenge of making this all work in the studio was given to producer Fredrik Nordström, who worked with AT THE GATES on their 1994 album ‘Terminal Spirit Disease’ and the celebrated ‘Slaughter Of The Soul’ the next year. “Fredrik works at his own studio in our home town (Studio Fredman in Gothenburg), so it was easy for us. We went there from 8am to 8pm every day for four weeks. Fredrik and his engineer Henrik Udd are also so easy to be around. We can be relaxed around these two, and just be ourselves, which was very important.” The man who mixed the album was Jens Bogren, one of the top names in the metal field at the moment. Bogren got the job after doing a test mix of a demo from the band. They were so impressed that he was given the entire album to do.“We wanted the style to come across as if it were the five of us playing together in a room, but also very precise. Jens has done an amazing job.”

Just how much time and thought has gone into this album is also heightened by the involvement of artist Costin Chioreanu, who worked on the cover for Anders Björler’s 2013 solo album ‘Antikythera’. What Chioreanu has done is to create a different illustration for every song. “He requested all of the lyrics, and then used these as inspiration for every piece of art he’s done for this. He’s
put a lot of thought and effort into what has been created.” The colours used in these impressive illustrations reflect the overall atmosphere in the music, being bleak, yet never depressing. It also accentuates the band’s old school attitude, in that it has a vinyl aptitude, harking back to the days when fans would spend literally hours poring over an album sleeve analysing every detail, because
this was seen as being a crucial part of the overall effect.

Lindberg believes that the album should be judged on its own merits and not compared to what the band have done before. In fact, AT THE GATES have always made a point of moving forward with each succeeding release. They are not a band who are content to repeat whatever’s been successful before. “That’s why each of our records sounds different to the rest. I’d say that ‘At War With Reality’ is aggressive,
which is what you might expect. Yet it’s also darker than we’ve been.” Above all else, this is an album capturing the honesty and integrity that has always defined AT THE GATES,making them one of the most significant extreme metal names of the past 25 years. Since their original formation in 1990, this is a band who’ve never been less than true to themselves. They haven’t tried to second guess trends or fan behaviour, but always recorded what they know to be music that comes from within. “Our first priority was to ensure we were happy with this album. And we are very satisfied with the way it sounds. Now, it’s time for everyone else to make up their minds. I feel confident, though, we have done something our fans will enjoy.” True devotees of AT THE GATES have always been excited by the band’s willingness to be diverse. ‘At War With Reality’ is a prime example.