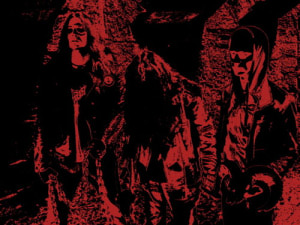 After their highly praised first Demo, the German Death Metal band ARCHAIC THORN is ready to unleash their next release. And for this new endeavor they have signed a deal with Unholy Prophecies.

It will be a new MCD / MLP called “In Desolate Magnificence” and it will contain 5 new songs (1 Intro + 4 new tracks) of high-class Nihilistic Death Metal. Drums are already recorded and the guitar parts almost finished as well. The results so far are VERY promising.

C.L, guitarist, had the following to say about the whole constellation: “Already during the recording process of the Demo we had some rough ideas of one new song that will now appear on this new release. We knew that it wouldn’t take too long until we would do the next step and show the world our conception of Death Metal. Someone very important during all this recording process was Jean-Michel Lehr, whom already sat behind the control desk during the Demo phase. He knew exactly what we wanted to have and he managed to let “Hydra Throats” sound as we wanted it to sound. On this new MCD / MLP we will not lose a single bit of that raw and unpolished charm but we would like to bring out the best of each instrument. But we don’t want to talk too much about all this and concentrate instead in the songs and the music on “In Desolate Magnificence”. We have decided to work with Unholy Prophecies because we know Walter for some years now and we know he is the right person for this endeavor. He is in front of a great label and also a good friend of the band. We are sure he will give his best to help us to move forward another bit. That is exactly what we are looking for. We are very happy about this cooperation.”

The MCD will be limited to 500 copies and the 12″ MLP will be limited to 300 copies. Elias Aquino (http://miasme-malsain.blogspot.de) will handle the whole artwork / layout. Expect this new release to be available around April / May 2015. All fans of bands like GRAVE MIASMA, HATESPAWN, NECROS CHRISTOS, old MORBID ANGEL and the like should definitely keep an eye on this band. You can check below a video of the band’s appearance at this year’s RAGING DEATH DATE playing the song “Reliefs” below (click on the image):