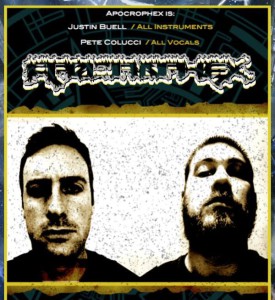 Fueling the members ever-growing obsession and fascination with the unknown, the cryptic and even the occult, the duo settled on the term “Apocrophex” as it was inspired and built upon the root word Apocrypha which translates to “all hidden things”.

In early 2013, multi-instrumentalist Justin Buell (ex- DECIMATOR, ex- PROPHECY z14) and vocalist Pete Colucci (Gukurahundi, ex- So I Shot Myself) united to form Apocrophex. Both members have put in time with various bands and projects throughout the past 10+ years, and immediately realized that their strengths complimented each others brilliantly. Lyrically, APOCROPHEX has risen above their peers as they have chosen to walk a slightly strayed path from what is normally perceived by fans of the genre, masterfully blending the intelligence, suspense and mystical qualities of vast cosmic themes with the hardened depravity and true unsettling despair of pure unadulterated death metal mayhem. This added depth in songwriting, partnered with intense deliverance, unfathomably technical guitar wizardry and the all important understanding of actual song structure, has led the band to explore and conquer all visible territories within the genre and even progress further into uncharted soils.

A varied assault of the expected death metal vocal work is bridged with the usage of tortured, but ultimately clean vocals, which are combined with the speed and fury of the strings and punishing percussion to enhance the works rather than deliver the average vocal/audio monotony. Realizing the progression in their individual abilities after their first demo, the duo immediately began working on what would become 2014’s stellar debut, the ‘Wheels Within Wheels’ EP. This furious 2 song effort focused on highlighting the speed, technicality and fluidity that this band is capable of and has been well received with both critics and fans alike. This EP can be downloaded for free on the band’s Bandcamp page, Apocrophex.bandcamp.com

During the tracking sessions for ‘Wheels’ the band was already demoing songs for their first full length album, once again, speaking highly to their persistency, will and ability to create. This full length album is now complete and with the help of renowned artist, Raul Gonzalez (Horrendous, Morbus Chron), the look of the upcoming full length will harmonize with the intensity of the music contained within. This monstrous 9 song effort will be released in early 2015 in both a standard jewel case edition and digitally by Manicidic Records.

NEWS
On March 10 2015, Manicidic Records will release the highly anticipated Suspended from the Cosmic Altaar by Apocrophex. This is 9 tracks of death metal for fans of bands such as Abysmal Dawn and Archspire! The band is currently offering their track “The Grey” as a name your price download on Bandcamp here: http://apocrophex.bandcamp.com/