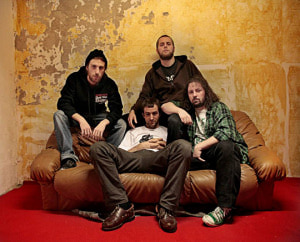 Feed the Ego, the sophomore album from Swiss thrashers ALGEBRA, is now streaming in its entirety. The album, which DeadRhetoric.com called “an enjoyable throwback to a time of anger-soaked thrash,” is streaming at:http://unspeakableaxerecords.bandcamp.com/album/feed-the-ego

ALGEBRA is superficially an unusual moniker for a thrash band, calling to mind mathematical precision and maybe pencil-snapping frustration rather than the blitzkrieg attack of Slayer, et al. But as one absorbs Swiss thrash machine ALGEBRA’s music, the name makes increasingly more sense. Both the math and the anger are here – the former in the unreasonably tight playing, complex riffs and spiraling lead work; and the latter in the lyrics, which tackle all manner of modern-day frustrations.

ALGEBRA’s debut album was self-released in 2012 and reissued by Stormspell Records afterward. Now they will follow that up with their sophomore effort. Feed The Ego satiates thrash-hungry listeners with nine aggressively complicated calculations, all mixed and mastered by Andy Classen. Unspeakable Axe Records will release this album on September 2, 2014.