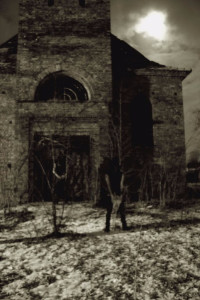 Poland’s ABOVE AURORA will release their menacing debut record “Onwards Desolation” via Pagan Records on the 27th of May. As its arrival fast approaches, the band are preparing the world for its impact by streaming it on Metal Underground.

“Onwards Desolation” is a six track leviathan, drifting from atmospheric doom to propulsive black metal. The record is a masterclass in tension and release; building tension and releasing it in barrages, the band prime your ears for their darkness before unleashing it blast after blast. The ebb and flow of it is hypnotic, lulling the listener into a state where the band can cast their ominous imagery deepest into the mind. The guitars create a loose, eery mistiness while the rhythm section commands driving counter-melodies and percussion, with vocals blending into the swamp of sound. The presence of this human voice is not to bring comfort from the desolate instrumental; its rough-edged tones instead form the uncanny face of Onwards Desolation, just familiar enough for the listener to let its horror deeper into their heart.

In the band’s s own words: “Onwards Desolation” is our commentary on the hopeless condition of mankind and the world as a whole. [â Ś] Not carrying relief is even encouragement to indulge in regression.”