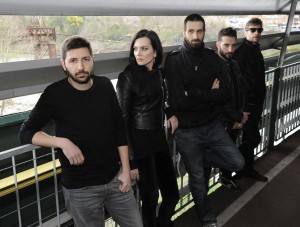 DISTANT LANDSCAPE, the Marco Spiridigliozzi’s solo project, is born in June 2015 with the creation of Insights Album: a very intimate and rich of atmospheres work, that had to remain private in the author’s intentions. In July 2015 Marco decides to involve Andrea Biondi to record the drums parts. The enthusiasm and the energy that come out from this collaboration convinces the author to develop the project. The studio work begins in March 2016 and it finishes, after a long period of mixing, in December 2016.

In the meantime Fabio Crognale on the bass and Alessio Rossetti on the guitar became part of the band. The DISTANT LANDSCAPE come to life and begin to prepare themselves to play live. In February 2017 Francesca Giuditta joined the line up, the only female voice in the album and already member, as Marco Spiridigliozzi, of the dreaming doom gothic metal band RAVING SEASON. Francesca is not only the singer of the band, she’s also the keyboardist.