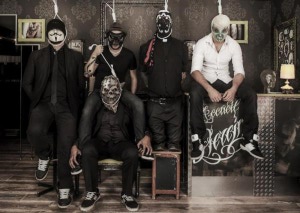 On January 12, 2015 Kaotoxin Records will release Deadly Scenes from Paris Avant-Garde rockers 6:33 (North American and digital releases follow on January 13). The first pressing will come in a limited edition (1,000 copies) DigiSleeve, bundled with a free 26-track label sampler. A special cassette version limited to 100 copies will also be available exclusively from Kaotoxin.

A tomb opens in a cemetery on a cold Halloween night. A wicked and deformed little corpse rises. Old blood on his decomposed face forms a clown-y red nose. His parents – DEVIN TOWNSEND, MIKE PATTON, and TIM BURTON – lay dead in the graveyard. Eating their rotten flesh, the undead little one, mouth full of remains, looks up to the moon and screams: “Cowabunga!” 6:33 rise again!

After the success of their self-released second full-length The Stench from the Swelling (A True Story) – a collaboration with CinC/CARNIVAL IN COAL and WE ALL DIE (LAUGHING) singer Arno Strobl – 6:33 is back with Deadly Scenes, a cinematic masterpiece of titanic proportions featuring nine tracks of totally twisted yet absolutely catchy Rock’n’Roll hymns that you’ll be unable to stop singing from the first spin forward! The band’s technical ability is mind-blowing, yet it’s never excessive. Rather, it is about exploring new territories that without 6:33’s songwriting magic would seem ill fitting. Experiencing a 6:33 album is like being on a bad LSD trip while listening to a DEVIN TOWNSEND album and watching TIM BURTON’S Corpse Bride. And it’s all legal! Will you take the chance? 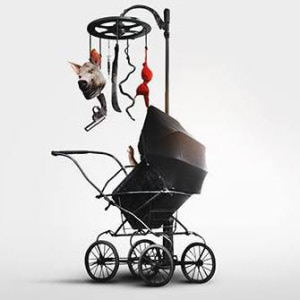