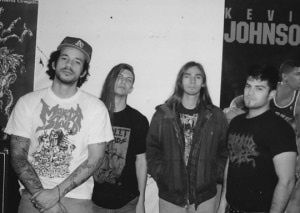 RUDE combine classic death metal in the vein of the early Pestilence stuff with the dirt of maniacs like AUTOPSY. Catchy, brutal, brain crushing metal to the bone. Soul Recall, featuring artwork by Dan Seagrave, was released on CD, vinyl and digital formats on May 30 via FDA Rekotz. RUDE has played shows with legends like MORBID ANGEL and MASTER, and recently completed a West Coast tour with FDA labelmates Derogatory and France’s Skelethal. Welcome to the filthy side of death metal, welcome to RUDE.

“The playing style of Rude easily showcases all the influences that have gone into their sound, and along with all the other factors such as the visuals of the album and the imagery that is conjured makes Soul Recall an album that would have fit in comfortably with death metal releases of the 80s and early 90s.” – Heavy Metal Tribune

“A great debut and worthy album to start off what should be a promising career for Rude.” – Glacially Musical

“Soul Recall blazes a familiar path, offering up tracks that are reminiscent of different classics from the American and European death metal landscape of the 90s, but it’s one of the best representations of that style from a newer band that I’ve heard recently.”
– Cosmos Gaming