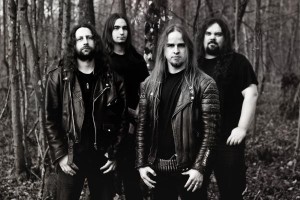 “L’Aube Glacée” is the second BAHRRECHT album which follows from “Nuit de Neige” released in 2011. “L’Aube Glacée” was created and composed by Feanor in 2012.

Less violent and more melodic but yet still keeping the european 90’s black metal influences, the band wanted to demonstrate how much it ment to them. The guitar riffs created on “L’Aube Glacée” are meant to be as powerfull as listening to riffs from bands such as WINDIR, DISSECTION, TAAKE and RAGNAROK; Or the less known but still as powerfull like the finnish bands of ARCKANUM and WYRD.

Once again the cold and mysterious landscapes of eastern France and it’s history has been the main inspiration of the melodic riffs of the album.