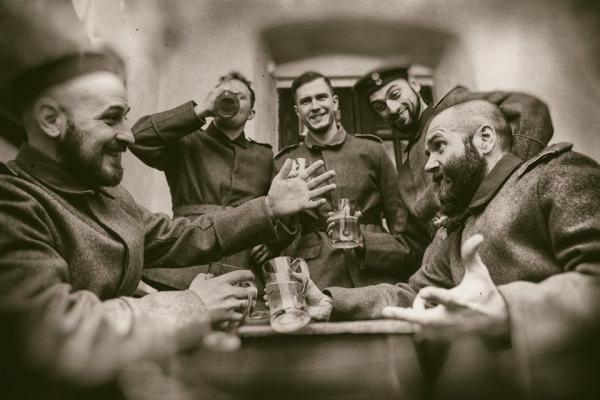 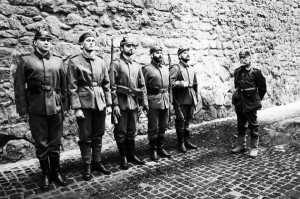 1914 (band) is already active for quite a short time so what do you keep in mind from the early days, the way it all started and how do you see the evolution of 1914 all over the years?
Yes, indeed we started not so long ago, on the anniversary of the Great War, in summer 2014. And as it usually happens, first year was spent for rehearsals, grinding in, crew changes, search for our style. If we’re talking about how we started and the evolution – initially main accent was made on black. But with time we started to add the elements of sludge, doom, even stoner parts. And we liked the result. Now we’re often tagged as a black metal band, although I do not consider us to be it. If you like – I define our style as trenchcore / shrapnel metal

The image of 1914 seems to be an important and an essential element in your work. Tell us a bit more about themes around the World War I?
Looks like we should put up with the fact that the question of WW1 will follow us everywhere)) Yes, the Great War, as it was called on those days, really is a key theme of out works. And it’s not just an odd trait, or a desire to fill in some niche, no – it’s really what I burn with and what carries me away. I am really a fan of the Great War, its history, soldiers lives, of everything that is tied to it. I was in for war archeology for many years, so it’s been quite a many times I dug out the remains of the fallen soldiers who died on that war. All that has left of their hopes, dreams, feelings and thoughts were rusty metal, skeleton and accoutrements fragments. Faceless victims of the Mad war. But despite all this – I’m really soaked through with the theme of WW1, I’m in love with this period and this history. And trying to infest everybody around me with it. I do hope that people who didn’t happen to watch movies, read memoirs and stories of the Great War, will be able to find out its madness, greatness and dirt from us at least. And perhaps we’ll wake peoples interest to this part of the forgotten among us history. Because the whole world remembers about the Great War except for post-soviet countries, and Ukraine in particular, where it was prohibited as imperialistic war, and where the memories of it were systematically obliterated by communists by interchanging it with the cult of victory in WW2 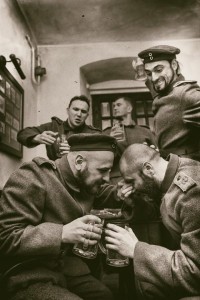 What were you trying to convey on this album and what do you feel it says about the band?
Convey? Almost everything. Fear, disappointment, madness, hysteria and agony, greatness and fearlessness, betrayal and self-sacrifice – all the palette of human feelings. We tried to show that war is no romance, it’s dirt, pain, death and destruction. It’s an extermination of family, destiny and life. It’s a grinder, that will mill you and spit out only bloody piece of meat. And all of your dreams, hopes and wishes will stay in the trench swamp forever. Great War is the war of the last gentlemen and knights, place and time where great empires and the old world died, it’s an open wound on the Europe body.

Für Kaiser, Volk und Vaterland – is this a nostalgic reflection on history or a call to fight today? Would you say anything in this world is valuable, or worthy of our respect and pride?
Those who don’t remember the past are condemned to repeat it. And this is no introspection, it’s the history that keeps going through our lives. War ended a hundred years ago, but still we’re facing its consequences. Second world war, this monster – it’s an ugly child of Great War. All the geopolitics and Balkan conflict are the heritage of Great War. Communist regime and the iron curtain, concentration camps and Third Reich, offended mustached painter who’s thrown the world into chaos – this all started in the times of Great War. Arms races and conventions, tanks, aviation, chemical weapons – all lasts out of that time. Great War is way deeper and stronger in our life as you used to think. So yes, it is a hundred year old cry which calls to arms today. Although the enemy is no so evident as a hundred years ago.

And regarding world values worth respecting now – everybody has his own. Communist will never understand the neo-nazis values, and they both will laugh at animal defender, anti-fascist will gladly beat up a teenager with head full of right ideas and vice versa, and buddhist will just give zero fucks about all this shit. Everyone has his own reality tunnel, personal values and things worth respecting. Personally mine are love and freedom. Love, create, live and enjoy every day. ‘Cause life is really short. And the main idea is – do not interfere with the others doing this. One should never consider his own opinions, ideas and thoughts have higher priority than someone else’s happiness, life or freedom.

Who are your heroes in the war history? Who do you look up to and why?
Heroes of this war are simple soldiers. Privates. People who ran into machineguns and blocked them with their bodies to let their friends break the frontline, soldiers who dug hundred-meter underground tunnels to blow up the enemy, soldiers who left their trenches and celebrated Christmas together with the enemy – just because they remained humans and not politicians with the head full of propaganda. Aid men and medics who saved thousands of lives. Defenders of Verdun and those German divisions who overtook Fort Douaumont. They’re too many to be named. If we’re talking about personalities they’re of course Ataturk and baron Richthofen, Hindenburg and Kaiser Franc Josef. 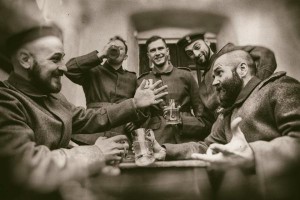 You may say that there’s a strong sense of history and old tales in your country?
Not the whole country, rather in the part of Ukraine we originate from – Galicia. Historically we were the part of Austria-Hungary, so the spirit of Austrian empire remained here. Our heroes of the Great War – Ukrainian Sich Riflemen are remembered here, after WW1 ended they fought for the independence and unification of Ukraine. Yes, I’d say history is remembered here, which unfortunately can’t be said of the entire Ukraine. Talking about me and my family – my grand grandfather had two iron crosses for bravery. His military stories that he told my father I also was told in the childhood.

Maybe stupid question, but… Is 1914 a political band? What do you think of politics in music?
No. We’re 100% non-political band and we don’t want to have any relation to all that right-left shit. To all that teenage ideology games within system boundaries. As I said already – my only police is to live, to love and to let others do the same. All the ideologies, politics, subcultures, games of movements that allegedly change world can go fuck themselves. 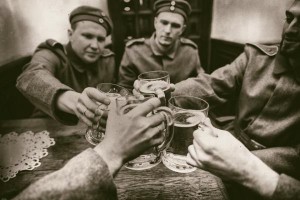 Please, can you tell me something about war conflicts in Ukraine? Have your family and friends been effected by the recent events?
Nothing to tell, actually – Russia invaded neighboring country as usual. It’s their way of life – shit under every fence around, capture other’s land, and after all that keep whining that nobody likes Russians. In fact, they invaded us again, as they did during last 100 years. Just the same way they invaded Poland, Lithuania, Latvia, Estonia, the Czech Republic, Hungary and so on, just like they once in the middle of the Europe boldly captured Eastern Prussia and Konigsberg. This is what’s happening here right now – military intervention and seizure of territories. Of course we’re all effected, I have many friends in the frontline now, my fellow musicians. It’s really hard to realize that in 2017, when Tesla rolls over the world and drives out fuel engines, water is found on Mars, Elon Musk plans private space journeys – our young guys are dying just because some insane post-soviet dictators imagined themselves to be masters of the world and invaded foreign country. And Europe still feels deeply concerned with their tongue stuck deep in the ass. Such a position of frightened impotent. So yes – we’re at war with Russian invaders and yes, it effects us all. And if other countries won’t step into this – this can start effecting them too just the way it was back in the times of soviet union. Or do you think these fuckers gonna stop on us? 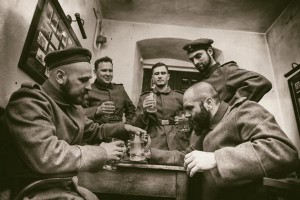 And how do you judge the current situation in Ukraine? What’s the feeling towards the Russian metal scene?
I detailed this just above. Regarding Russian metal scene – if a person doesn’t support Putin’s regime, if he doesn’t keep considering Ukrainians to be younger brothers of Russians, if he has no imperial manners towards my country – I’ll gladly share a scene with him and have a drink afterwards. Otherwise – fuck him, no matter how good his music is.

What made you decide to include a cover of NIRVANA’s “Something In The Way”? It’s a big surprise! But this version is very… very sad.
I always loved this song. In my head I crisply associated it with Somme battle. I used to read soldiers memoirs of it, and there was a frase – and we saw these huge machines, vomiting fire and smoking like hell, it was death itself, it was like Something in the way. And after many years I recalled this episode and offered to play this thing as we feel it and see it. And everybody agreed. And we showed the madness and doom of that Somme attack.

Question of new times for 1914. What inspires you most, when you are writing new lyrics?
History. I read something, watch, dig all the time. It’s a constant process for me. And when guys make a new thing and start playing it on the rehearsal, as a rule it’s our guitarist Olexa who generates new ideas – I just listen to the new thing and it catches something in me, and I understand – that’s it! it’s about cavalry attack, no really listen to this, it’s a cavalry attack. Or this one for instance – it’s monotonous, measured, as if your sitting inside attacking МК lV. Crew makes laugh of me, then they listen a long lecture about another tank, grenade, or a canon user by soldiers in Great War and then they say – OK, enough chatter, we’ve a work to do, and this is how we make our songs. Especially new material 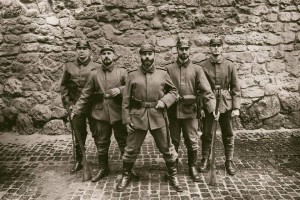 How important is the contact to your fans? What type of fans are you seeing at the recent 1914?
Well, we’re not some shitty rockstars with a ton of pathos. Our fans are the people just like us, and we perfectly communicate prior or after the show, they write us much and we’re trying to answer every message, question or request. If you’re interested in anything, there’s no problem in coming and asking us. Or just have beer with us)). And there are different people at our concerts – from metalheads in spikes and leather to reenactors, regular military and just a war history fans.

What are your current future plans?
I guess, just like any other band – record good releases, touring across Europe, get into huge nice fests, work with cool label to bring our ideas and history to as many people as possible. Live, play music and have fun.

Thank you for your answers! Best regards!
And thanks to you!