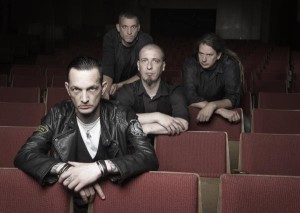 The unique style of TUNES OF DAWN has been elaborated even more without losing its spontaneity or even its healthy lack of respect when it comes to serving themselves on the rich buffet of different musical elements. With this a new album was created that unites different styles, sometimes just cited shortly, within a dark-rock mood.

Again the four protagonists act in blind understanding. Be it in the perfect tuned movement of rhythm or in sound-constructions erected by guitar and keyboard, where layers of melodies intertwine, forming a greater whole. In all this T.O.D. never loose the twinkle in the eye which they are so famous for. songs reflecting the ambiguous lyrics in a combination of pure Rock-music and intense electronic elements.

Even lovers of more tranquil moods and heartaches are served well. The latter though revealing on a closer look that it is not the simple situations in life, which T.O.D. tends to expose. To reflect the complexity of life, go a bit behind the obvious is as much part of their music as is serving fine Rock music to get it going. To form whatever life hands them into unique combinations of poetry and music, to create a diversity that never becomes arbitrary, that is what TUNES OF DAWN is all about.

This is also reflected in the path taken from the first two long players to this album. To blend the rough, rocky atmosphere of the first with new dimensions of sound developed in the second one and take it further was the perfect soil for growing new ideas in and with which the new album was formed. Thus creating a flower that has the amazing ability to truly shine in dark colours.